I absolutely loved this edition of Binibining Pilipinas and it may actually be the one of the best editions for me. What’s freaking insane is that it is the first time it was actually televised in real-time! And with no live audience too well…because Covid. Ahem. So, I have to talk about a few things this edition has offered us.

The Binibining Pilipinas 2021 was supposed to be the year 2020 edition but due to the pandemic, it was moved a year later which is the very first time the pageant was not held since it’s inception in 1964. However, Samantha Mae Bernardo, Binibining Pilipinas 2019 Second Runner-up and was a contestant of the supposed 2020th edition was appointed the Philippines’ representative to the 2020-2021 Miss Grand International earlier this year making her the only title holder to wear a 2020th sash! So many fun facts!

Another first for this edition is its all-female hosts with two former Binibining Pilipinas queens – Miss Universe 2018 Catriona Gray and 2016 Binibining Pilipinas Grand International and 2016 Miss Grand International First Runner-up, Nicole Cordoves. Catriona and Nicole not only made a Binibini history last night, they also did an incredible job that it’s hard to imagine them not doing this every single year moving forward!

The Stage: It looks amazing! It was simple and classy looking with its three gigantic led screens! Easier

The Opening: Donning yellow, orange and lime-green cocktails dresses, the girls dances a to a new Binibining Pilipinas song! It was catchy and they all looked absolutely amazing! The introduction was a sight to behold too, showing each Bibibini in their respective National Costumes! It was marvelous! The costumes are simply to die for! Why are we not seeing these kind of costumes in the international level though? Hmmm…

Last batch and some major awards:

The proceedings was fast! The top 12 were announced right away plus a Top 13th people’s choice voted via the Binibining Pilipinas app, and they paraded in Swimsuit and their beautiful Evening gown! It was such a glorious sight!

My favorites for the swimsuit round are: Maureen Montagne, Hannah Arnold and Meiji Cruz.

As for the Evening Gown, it was obviously Gabrielle Basiano with that presentation that totally nailed the round! Another one of my favorite for this round is Hannah Arnold with her baby pink gown ensemble and Graciella Lehman with her effortless pasarela!

As each finalists is called into the top 12/13, she will deliver a short message about her pandemic experience (this is almost similar to the opening speech in the Miss Universe during its 2018 and 2019 edition)

Here are my on the spot notes last night for each finalists!

Another segment is an interview with Miss International 2013 Bea Rose Santiago who’s battling a end-stage renal failure and she delivered a lovely message of hope to the girls and to us viewers! Get well soon, Bea!

Can I just talk about how amazing the Evening Gown presentation was? I mean, that’s international level of production! Each girl in the top 13 talks about their chosen gown and the symbolism it represents! So powerful!

Moving on to the ‘dreaded’ Q&A, it’s obvious that a lot of girls were nervous. Overall, I thought they all gave amazing answers! It just boils down to presentation and how confident they are with their answers!

The one that top this segment is surprisingly Miss Cagayan de Oro – Misamis Oriental Cinderella Fae Obeñita. She just sealed her win with that answer!

I loved Meiji. She’s such a stunner but I didn’t expect her to place this high after the Q&A but overall, she’s probably in the upper tier of the scoreboard to nab this title.

I really thought that Maureen would either win the International or the Grand International title so I was very surprised that she got Globe! It’s still a crown after all and she very much deserved a crown, regardless of the title! She was unstoppable last night!

As I’ve mentioned above, her gift of gab is her major strength that none of the girls probably expected! She was such a revelation and she should thank her lucky stars that she won the fan vote! Tonight was her destiny fulfilled!

Samantha is definitely one of the best speakers in this batch and I was also on the lookout for her during the first few months of the competition but that excitement died down as the other girls started to peaked so I was very much surprised that she was named to follow suit Samantha Bernardo in Miss Grand International. Samantha reminded me of the Binibining Pilipinas-Universe prototypes of the early 2000’s. I’m excited to see her transformation on her quest to win the first ‘golden crown’ for the Philippines.

Binibining Pilipinas International 2021: With the Miss Universe pageant no longer affiliated with Binibini, Miss International takes center stage as the premier crown for the most prestigious pageant in the country! Hannah Arnold rightfully and deservedly won this major crown last night with her flawless performance emulating a doll and humble demeanor which the Japanese couldn’t seem to resist! She’d definitely do well in Japan later this year!

Overall, I am just in awe of the level of production, the girls, the hosts, the judges – they just set a new standard on how to stage a pageant in the new normal!

Watch the full show of the Binibining Pilipinas 2021 Grand Coronation Night on their official Youtube Channel.

All images are courtesy of Binibining Pilipinas Official Facebook Page.

First and foremost, let me say my congratulations to the new Miss World Philippines queens most especially to Katarina Rodriguez who successfuly managed to secured the rights to represent the country in China this December!

Now, let’s talk about that dangerously designed stage – lol. Seriously, whoever thought of that probably was hoping someone would fall off the two gaping holes in the middle! Kidding! Luckily, nobody did. The lighting and camera works was okay but not as good as last year’s edition. The whole thing just looks like a super-sized runway.

The MCs for the event are Miss World 1993 2nd Princess Ruffa Guttierez, GMA Artist Carla Abellana and Mister World 2012 Francisco Escobar. I thought Ruffa and Carla did a decent job engaging the contestants since they got to interview each winner of the fast track events which was rather tedious if I may just say so myself.

Francisco Escobar on the other hand was a total eye-candy but he seriously needs to do some workshop if he wanted to continue doing these stuff! It was so awkward and almost painful watching him! I know that English isn’t his first language but since he’s well-traveled and he’s been based in New York for a while now, I thought he’d be more articulate to say the least.

Introduction: The 2017 queens led the the very long dance sequence before the introduction of the 40 candidates. The contestants look cute with their opening dresses but the introduction felt stilted and the audio was not that good. The mic could barely pick up their voices.

Top 10 Question & Answer portion was facilitated by Ruffa and Miss World Philippines 2017 Laura Lehman who both did a great job in this segment by the way.

#5 – Kim De Guzman – A pageant party answer. She’s one of the girls I really liked before the Q&A. She should practice more because her answer was a generic answer that is very much forgettable.

#23 – Marianne Marquez – She gave a very practical and specific answer. Not as ‘pageant patty’ as most girls but still forgettable.

#32 – Kylah Sanchez – I loved her composure despite being only 16! Can you believe that? 16! She gave a decent answer, though the delivery could’ve been more precise.

#34 – Danielle Joie Magno – She was asked about crypto currency and I was like??!! Wtf? Her answer reminded me a bit of Pia Wurtzbach’s answer during the top 6 q&a of the Miss Universe 2015. It wasn’t very convincing but she was able to pull it off in a way that doesn’t make her sound like a dumb blonde.

2nd Princess: #11 Pearl Hung – Ugh. Pageant patty answer. I honestly don’t know why she was elected to a runner-up position.

1st Princess: #39 Chanel Morales – I do loved the sincerity in her voice. I thought she deserved her 1st runner-up placing. Her answer about shaming is beautiful! It may sound rehearsed to some but I thought it was one of the most hearfelt answers that night.

Miss Multinational Philippines 2018: Kimilei Mugford – It’s obvious that she’s very articulate and English is also obviously her first language. I personally thought she did better than Muhlach and should have gotten the RHA title but at the end of the day, she’s still a winner!

Reina Hispanoamericana Filipinas 2018: Alyssa Muhlach Alvarez – She gave a very convincing answer about discrimation against women in the workplace but it wasn’t as eloquent in comparison to Kimi or Kata.

Miss Eco Philippines: Maureen Montagne – I find her answer a bit disappointing because she was just getting round and round. I wished she could’ve worded her answers differently or maybe she was just nervous?

Miss World Philippines 2018: Katarina Rodriguez – I do loved the casual way she answered her question. Along with Kimilei, I thought she delivered her answer full of sincerity despite almost sounding like it’s a memorized answer. I do trust her gift of gab, though, so I am happy that the judges made the right call to crown her the new Miss World Philippines!

Overall, it was a good program. It’s not as grand as last year –  production-wise but it’s apt with the whole concept of Miss World. I loved how the ‘Beauty with a purpose’ theme was heavily mentioned throughout the night. Plus, we’ve got a new set of lovely queens that I’m sure would make us very proud yet again in the pageant arena! 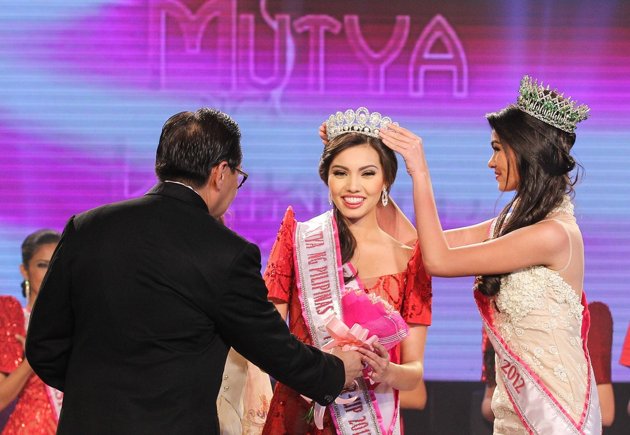 The twenty-one old Maureen Ann formerly competed at the Mutya ng Pilipimas 2013 where she was awarded Mutya 1st runner-up and got the Mutya ng IVI Collagen award. The pageant was eventually won by Angeli Dione Barbas Gomez (who won her international assignment) and Koreen Medina as the main winner (who also placed internationally).

Maureen is set to compete for Miss USA 2015.