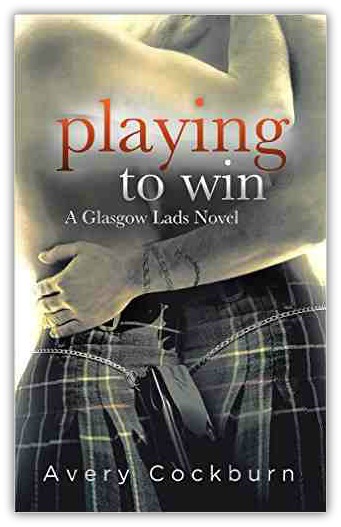 So how do I go about with this second book of my favourite series this year? It’s Colin and Andrew’s story so that ought to excite fans who loved them in the first book because sexy, crass Colin is back and the too-cool for school Lord Andrew is ready to go all-out in wooing the very political and youngest player of Woodstoun Warriors. Yes, I did say political because their story was set in the midst of Scottish-Independence struggle and as much as I’d love to tell you much about that from what I’ve learned from the book itself – I don’t think there’ll be much I can accurately say about it. Truthfully, I wasn’t even aware of it when it happened so I ain’t touching that one baby.

The story though is nothing short of special as a follow-up to that super-awesome Playing For Keeps starring Fergus and John. Colin and Andrew are so very different from said couple and I loved how they set their difference aside in order to meet halfway to try to make their relationship work.

Both are young so I loved that Ms. Cockburn was able to flesh out their personality in such a way that shows where they are in terms of maturity. Colin for me is the idealist one whilst Andrew is the realist in the relationship. ‘not saying the other one has more maturity but again, they have differences when it comes to not only their social standings but also their point of views which is why they hit it off to begin with. Andrew needs someone who will keep him grounded while Colin needs someone equally stronger emotionally keeping him from his bouts of histrionics when it comes to his political views. I said that I won’t touch the “political” side of things but I keep on bringing it up. I hope I am not offending anyone with my views towards Colin’s character. It’s just how I view his views ‘politically.’ So if I were to compare myself from either Colin or Andrew, I’d say I’m more of an Andrew person.

I obviously enjoyed it although the first couple from previous book is still my favourite, I thought this one sends a very strong political message (I know, sorry) and the characterization of both MCs is a strong depiction of them young people at the moment. Millenials they call them?

This review may sound way subdued from the first book but I think a lot of people will enjoy how very different this one is and readers (like my friend Riina who recommended this series) will fall for Colin onset of the story!

I absolutely recommend this book and this series!

About The Author
Hiya, I’m Avery Cockburn (rhymes with Savory Slow Churn). In a previous incarnation I wrote over a dozen novels for major publishers. Some of these books even won awards, which was pure awesome. But last year I decided to “go indie” so I could write exactly what I wanted, how I wanted, and publish as fast as readers wanted. Now my days are filled with beautiful men who play the Beautiful Game in the most beautiful place in the world—and who happen to love other beautiful men. It’s pretty much the best job ever.

I currently live in the United States with one infinitely patient man and two infinitely impatient cats. Readers make my day, so email me at avery@averycockburn.com, or sign up for my mailing list at http://www.averycockburn.com/signup to get loads of exclusive Glasgow Lads bonus material. Cheers!

This entry was posted in Others and tagged Avery Cockburn, Book Review, Glasgow Lads Series, Playing To Win. Bookmark the permalink.