So I was checking out my online feeds and received a tweet from a friend about a certain issue over Goodreads about an author named Dylan Saccoccio who apparently had a “meltdown” over a low rated review of one of his books entitled The Boy and the Peddler of Death. I immediately checked out the Goodreads page of the book and was in total awe by the whole “conversation” between the author and a reader/reviewer named Cait. It was like Kathleen Hale all over again but this time, the author really went all out about the merit of giving out a one-star rating. I’m like, “is this shit even for real?” 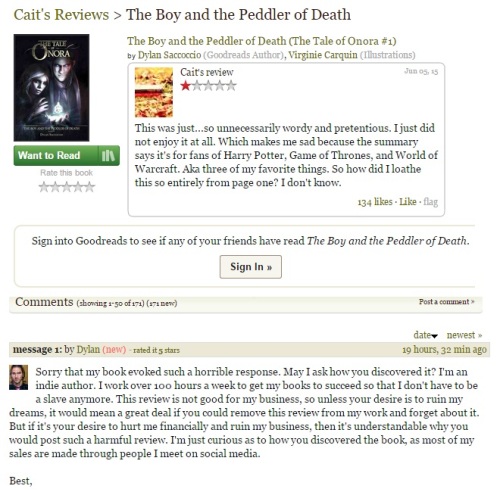 Seriously though, if you cannot handle criticism, then you are definitely in the wrong business buddy. And it’s not like if somebody (like myself) gave a lone-star review, it doesn’t mean that they’re out to get you or “ruin you financially” or something. I started reviewing books over a year ago and has been a member of Goodreads for a good four years now and trust me when I say, I’ve read far worst reviews by readers who sometimes are also fans of the author themselves – a one or two star ratings are not available for readers to just throw in just to fuck with authors – it simply shows that the readers does have reasons to NOT like the book. PERIOD.

I myself have given one-star reviews and I’m lucky that I was not “attacked” for it.

One of the authors that I’ve given a single-star review was Lisa Henry and I loved most of her works but that one book didn’t work for me. Another is Veronica Roth’s Allegiant, then there’s Amy Bartol’s Indebted..so there…

Unless you personally know that “reviewer” and there’s some shade throwing in there but a few one or two star reviews won’t really “hurt the author” and “destroy one’s dreams” – way too dramatic.  It may even increase the interest about your book. Remember what they say about publicity. Or perhaps, that review should’ve been be a way to analyze things and perhaps be better next time or maybe always keep in mind that YOU CANNOT PLEASE EVERYONE. The book may be a really awful experience for one reader but I bet it would be the best read for another. Seriously, Dylan – chillax.

This entry was posted in Books and tagged Dylan Saccoccio. Bookmark the permalink.