[Book 1 of Tales From Kansas Series] 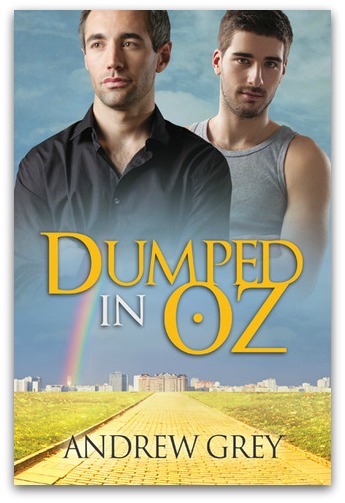 Blurb: Because of an opportunity he’d be a fool to turn down, Lyle Powers transfers to his company’s warehouse in central Kansas. The last thing he expects is to meet another gay man in the small town, let alone one who captures his interest.

Roger Kypers is a recovering alcoholic with a twelve-year-old daughter he only gets to see for part of the summer. Neither Lyle nor Roger is looking for a relationship, and they fumble at the start, yet emotions build as Roger shows Lyle the landmarks of Oz.

But when Roger’s wicked witch of an ex-wife threatens to take his daughter away for good if he doesn’t act “normally,” he’s faced with the challenge of letting her get away with it, or fighting to accept himself and standing up for what he knows is right.

I’m not exactly sure how to go with this review – This was my first book by Andrew Grey and I was maybe expecting a bit too much from this that’s why I end up disappointing myself. The book wasn’t so bad – I thought the MCs – Roger and Lyle had great chemistry but the story as a whole didn’t do anything for me. It lacks development and each character is rather forgettable. Halfway through it, I was hoping that there’ll be some sort of drama aside from Roger’s ex-wife but it seems like all the characters went to boringtown until the end of the book. It’s a good thing that it’s not that long because for its thinly veiled plot, it’s a wonder that it went over a hundred pages. ‘Not very sure about this series but I’d probably read more Andrew Grey stories in the future because I’ve read so many positive reviews from his other books.

This entry was posted in Books and tagged Andrew Grey, Book Review, Dumped In Oz, Tales From Kansas Series. Bookmark the permalink.