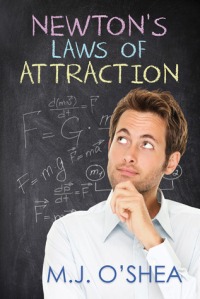 Okay, so this is going to suck big time because I loved M.J. O’Shea’s writing and her books are like my comfort books – some of my favorite rereads because they’re just happy stories and each character are all so likeable and you’d really root for them.

Newton’s Laws of Attractions centers on Ben Parsons and Rory Newton. They are best of friends since they were seven who fell for each other when they turned seventeen. Then during their senior year, things changed when Ben became one of the jocks and he started getting shit for hanging out with the science fag. He pushed Rory away until he stopped contacting him which ended everything for them. Eight years later, Ben now teaches art at his old high school and to his surprise, Rory went back as the school’s new chemistry teacher. Now that Ben’s very out of the closet and proud of it – he wanted to make it up to Rory and he’ll do everything to win the guy over although it may very well be too late for him…

I didn’t get Rory at all with the whole dating other people and all. I know he’s still hurting for what Ben did to him in high school but once they started fooling around again, I thought he’d at least not be a dick about “rejecting” Ben again before realizing at the end that he loves the guy. I thought the last part of the story was a bit lazy and ended abruptly. I didn’t get the way it just suddenly finished when there’s more to it that should’ve been dealt with. But since this was the first book of the series, I’m guessing we’ll be hearing more from them in the second book.