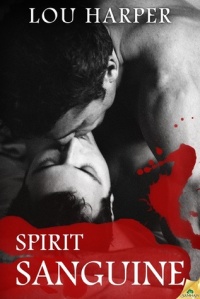 I never thought that I’d fall for another vampire-themed story. Now this one’s totally getting into me. Like BIG TIME! The story centers on Gabe Vadas, a vampire slayer who came home in the States after five years of slaying “bloodsuckers” in Europe. Returning to his hometown in Chicago, he was kidnapped by a young vampire named Harvey Feng whom he initially tried to kill. After being spared his life, attraction ensues between him and the young vegetarian Vampire. Now scouted by the Vampire mafia boss for a job he couldn’t refused, he together with Harvey were thrust into  more  action that they know they could handle, more than their growing passion for each other.

I’m totally riding this bandwagon. I’m actually clueless why it’s not getting tons of five star ratings. I loved Gabe and Harvey. They have this amazing chemistry and I just love their adventures together. Harvey’s quirkiness and penchant for role-play was truly adorable and hot as hell. And Gabe – oh my, the guy’s a sweetheart. I’m super excited to read more from their conquest. They’re truly an amazing couple and this is one hell of a promising series!