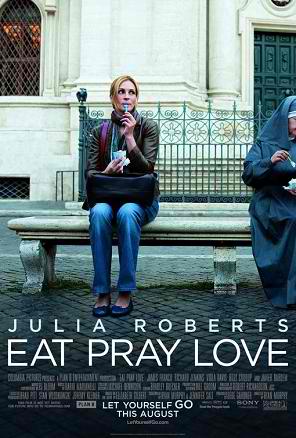 It was after the Oscar this year when I found out that Julia Roberts will have another film (other thanValentine’s Day -where she shared the screen with practically everyone in Hollywood) for which she top-billed the role of the writer Elizabeth Gilbert who wrote the book where the movie was based. I’ve been waiting for this film for like forever and it was only shown here two months after its release in the States.

Was it worth the wait? I would say yes because Julia is simply one of my favorite actors and seeing her being “Julia” again even though she is playing a real life character makes me love her even more. The film was engaging and funny at times–not very moving at all but it would make you think something about life. About freedom, choices –what exactly do you want to do in life?
My only problem with this film was that it tends to be a bit draggy. It was 2 hours and 22 minutes long and I am like –Okay, so when does she go to India? My favorite part would have to be her Italian escapade. It makes me want to go to Rome –and seriously, I HAVE TO GO TO ITALY!
James Franco was very charming as usual but I did not really connect with his character while Javier Bardem on the other hand was such a darling to watch!
I’d probably recommend this film to people who loves watching long “Julia Robert” films –I’m not expecting too much from this film because I really haven’t read the book (which I ought to do soon) –but I’d say I really did enjoy it –it was really a feel good film.
Ratings: 7.5/10 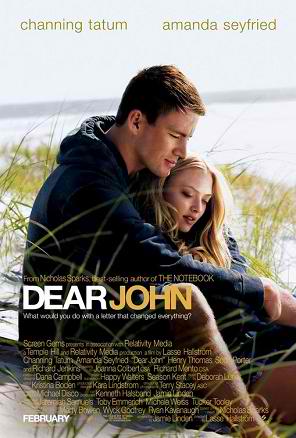 Dear John on the other hand strangely touched my heart in a subtle way that Channing Tatum and Amanda Seyfried delivered their lines. The whole letter thingy was something that I can relate to being in a long distance relationship (before) myself. Their love reminds me of Ennis and Jack’s love for each other in Brokeback Mountain for some weird reasons. It’s like knowing that you love each other deeply but you can’t be together. I love how the film ended differently than what is written in the book by Nicholas Sparks. Atleast, audience have the chance to conclude that they end up together because Tim died eventually whilst in the book Tim lived. I’d say it is my favorite Nicholas Sparks film adaptation to date.

via my former blog http://paddylastreviews.blogspot.com