Pia giving it a third go for a Binibinig Pilipinas crown.

Day three of the screening for this year’s Binibining Pilipinas pageant has been an interesting one. Fan favorite Pia Wurtzbach who caused quite a stir last year after going home crownless was spotted along with her fellow Aces & Queens sisters – Wynwyn Marquez (daughter of actors Joey Marquez and Alma Moreno) and model Kylie Verzosa who has been in the pageant fans wish-list to join for a couple of years now. 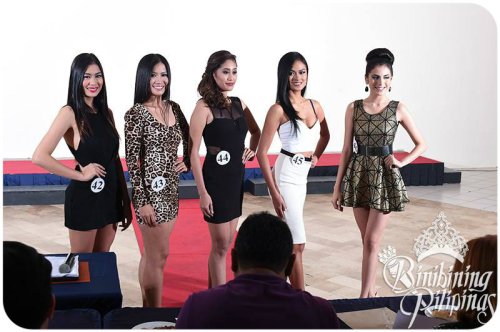 Binibining Pilipinas Gold and Miss World Philippines 2013 contestant Ria Rabajante will also be trying her luck in the pageant for the second time after failing to advance into the semis in 2013.

Here’s Kylie Verzosa looking pretty at a shoot.
via themaneidea.tumblr.com

2015 is definitely looking like the battle of the repeaters! I wonder what will happen to the freshies? Who will reign supreme among them? Good luck girls!

I was channel surfing this morning, and ABS-CBN Channel 2 was showing Catch Me… I’m In Love. Until today, I was unaware of this film since I’m not that big of a fan of its lead actors. This 2011 romantic film stars Gerald Anderson and Sarah Geronimo working together for the first time. Sarah plays Roan, a hopeless romantic assigned to accompany the President’s son played by Anderson on an immersion trip. The trip leads both in learning more about each other, and soon enough, love ensues despite their differences.

Sarah Geronimo reminds me so much of Regine Velasquez. She has this very charismatic attack on each role given to her and has this great comedic timing. She’s indeed very funny and just as compelling as her role in A Very Special Love, and You Change My Life. The biggest revelation for me, though, is Gerald Anderson. Wow! I never thought that Gerald could act this well! I always thought of him as that teenage boy playing the love interest of Kim Chui since the first Pinoy Big Brother Teen Edition. Boy, was I so wrong about it! I love his portrayal of a carefree, happy-go-lucky presidential son. In this film, he somehow reminded me of the young Chris O’ Donnell in Mad Love and Scent of a Woman. In my opinion, Gerald was the torchbearer of this film!

Sam Pinto here was a great distraction since she could not act here to save her life! Still, I would give her the benefit of the doubt because I think this was her first film, and I just thought throughout her few scenes that she is so damn pretty!

Overall, the story development was cheesy enough that you would melt with it, and I find myself grinning from ear to ear! It was engrossing and very pocketbook-ish. Yes, it was a feel-good film, and I don’t mind watching it again.