Blurb: It’s typical of video game programmer Josiah Simmons to be the last one on the plane on the way to the biggest meeting of his career. Though he’s (mostly) coping with his ADHD, he can’t handle another distraction. But he also can’t ignore his rugged seatmate—especially once he learns the military man’s a fan of his game.

Ryan Orson refuses to let his severe injuries pause his career as a navy SEAL. He’s got hours of grueling physical therapy ahead of him, and no time for anything that might get in the way of his return to active duty. But that doesn’t mean he’s above a little first-class flirtation with geeky-cute Josiah.

When a delay strands the pair in St. Louis, they agree to share a hotel room and a night of gaming. Neither expects their new connection to move to the next level in the light of day. Opposites may attract, but is this game over before it’s even begun?

So this is the third book off the ‘Gaymers Series’ and having read the last two installments and liking them, I’d say that the author is consistently hitting all the marks with this series. This one here is a different couple, of course. First chapter and I’m already in love with Josiah’s character. I didn’t even remember him in the second book – apparently, he was the guy who made the ‘bet’ from the last book. Not a big deal and you won’t missed out so you can enjoy this as a stand-alone book altogether.

At first, I wasn’t sure what to make of Ryan’s character but as I go along with the story – I kinda understood why he’s such an angsty bastard. There wasn’t really something new about the story but I loved how the author created the story in a rather straightforward approach. The two met, had sex, realized they need each other, move in together and they live happily ever after. In short, despite the cliche story – it’s still very much enjoyable. Though I’ve a bit of an issue involving Ryan, I didn’t particularly liked how he handled his ‘failure’ in the story. It feels like Josiah was used as some kind of a rebound . That was just me tho, being all indignant for Josiah’s sake. LOL.

Aside from this, as I’ve said it was an overall enjoyable read. Heat is somewhere between 4 to 4.5, characters well developed and just a great addition to the series. I hope there’s more to come!

ARC provided by the publisher via Netgalley for an impartial review. 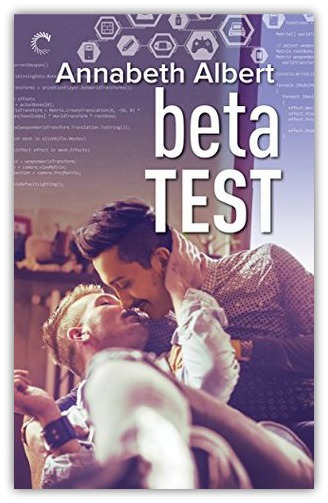 This is very exciting for me because I’ve read the first (and just found out about it) book last month and really enjoyed it so I am really looking forward to this installment. So, I was really stoked to get an ARC of the book and dived right into it!

The story centers on Ravi Tandel and Tristan Jones – both are new employees of Space Villager. Ravi is the life of the party. He can charm just about anyone whilst Tristan is his exact opposite – reserved, organized, and uptight. But they’ve got something in common aside from being gay. They’ve been burned before by their exe’s so whatever fire of attraction they mutually feel was easily extinguished.

When they were sent on a road trip to a gaming conference to unveil a top-secret game, they were able to actually work cordially and get to know each other really well leading to some explosive sexy times between them. The question is, after this road trip will they be able to keep up with being just friends/colleagues?

I really loved the slow buildup of their romance. I loved that we get their personality first through alternating point of views and there’s just something nice on how they connected through sex at first but on an emotional level as well. I loved how Ravi brought Tristan’s confidence back and how he didn’t push him too far. I loved that Ravi’s Hindu background was brought up. It was a breath of fresh air when there is diversity with the main characters in books. I loved that he’s not spineless but still very respectful regarding his family situation.  It was a really good touch into the book which added much charm into Ravi’s character.

Whilst Tristan could get annoying at some point, it was still nice that he finally stood up at the end. It’s nice to have that feeling of vindication when a character finally found his voice to be himself.

This was a low-angst read that a lot of readers and fans of the first book will thoroughly enjoy.  Now, I am looking forward to read the next installment.

I highly recommend this one!

ARC was provided by Carina Press for an honest and impartial review.

Blurb: Adrian Gottlieb is winning at life. He’s a successful video game designer with everything a man could ask for, including a warm comfy ride to Denver and a date for his sister’s wedding. But he finds himself in need of a total reboot when he’s left stranded at a snowy campground in Utah. Holiday plans? Epic fail.

That is until Noah Walters offers him shelter for the night and a reluctant cross-country ride. Nothing about the ultraconservative geoarchaeologist should attract Adrian, but once he discovers Noah’s hidden love for video games, the two connect on a new level. Soon, a quiet but undeniable chemistry sparks.

Something doesn’t add up, though. As the miles accumulate and time runs out, Noah must face the most difficult choice of his life. Meanwhile, Adrian must decide whether he’s ready to level up. Is their relationship status worth fighting for, or has this game ended before it’s even begun?

I thought it’s really cute – I really loved Adrian’s character tho I don’t get the deal with his ex Deron marrying his sister Emily. I supposed Deron’s bisexual? It’s a minute detail but it bothers me a bit.

I loved the underlying sexual tension between them that it’s almost palpable. The friendship that blossomed between Adrian and Noah was wonderful to read. Although they are both feeling the sexual tension in the air, I loved that they let it simmer first.

The story’s really smooth – not too wordy, not ott dramatic. Noah’s situation was quite realistic so plus point for that. I’m sure glad that Noah situation was not drag into hell and back because tho, realistic it was still an overused trope.

And pets! Who doesn’t love pets in a book! And in a romance book!!!

It was a feel-good, cute story – ‘would definitely be reading more from this series