Out Now: Playing in the Dark (Glasgow Lads #4) by Avery Cockburn 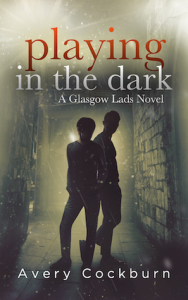 Finally! The long wait is over! Close to three years after the release of the last Glasgow Lads installment, we are finally getting Evan’s story. if you’re a big fan of the series like moi, you probably are very curious as well as to what pushes Evan to leave Fergus behind? A lot of us speculated that he’s a secret service agent, was blackmailed or he’s just a regular-ol’-a-hole but we all want a great redemption story right? So here’s the answer to all of our burning questions – Evan and his love interest Ben’s own book entitled Playing in the Dark!

The popular Scottish gay romance series takes a thrilling turn, as a spy falls for a wedding planner who can’t keep a secret to save his life—literally.

Evan Hollister needs to feel real. He’s pledged his life to protecting the innocent, but heroism carries a heavy price. After his job forced him to abandon his last boyfriend, Evan vowed never to love—and hurt—another man. Now, a wedding planner with a kind heart and a goofy grin is taking a blowtorch to Evan’s wall of ice.

Ben Reid needs to feel safe. Burned by secrets in the past, he thinks knowing everything about everyone is the best way to keep people happy—to keep them, full stop. But after falling for a god-on-earth-gorgeous footballer spy, Ben learns that some secrets can never see the light.

When Ben’s same-sex weddings become a terrorist target, Evan must once again choose between the man he loves and the country he swore to defend. And Ben must find the courage to fight for what he needs—no matter the cost.

I don’t know about ya’ll but I’m having my pre-holiday vacation next week I have this newly released book from Avery to read while enjoying the beautiful  beach of Boracay.

If you haven’t read the series you can get them from Avery Cockburn’s Amazon page. and of course, don’t forget this latest release from the series! (Read my reviews of the first three books by clicking this link)

I’d really try my best to contain myself and not read this right away because I really just want to savor the whole thing while enjoying my off from my dayjob!

You can order Playing in the Dark below!

About The Author
Hiya, I’m Avery Cockburn (rhymes with Savory Slow Churn). In a previous incarnation I wrote over a dozen novels for major publishers. Some of these books even won awards, which was pure awesome. But last year I decided to “go indie” so I could write exactly what I wanted, how I wanted, and publish as fast as readers wanted. Now my days are filled with beautiful men who play the Beautiful Game in the most beautiful place in the world—and who happen to love other beautiful men. It’s pretty much the best job ever.

I currently live in the United States with one infinitely patient man and two infinitely impatient cats. Readers make my day, so email me at avery@averycockburn.com, or sign up for my mailing list at http://www.averycockburn.com/signup to get loads of exclusive Glasgow Lads bonus material. Cheers!

This entry was posted in Authors, Books and tagged Avery Cockburn, Glasgow Lads Series, Playing in the Dark. Bookmark the permalink.