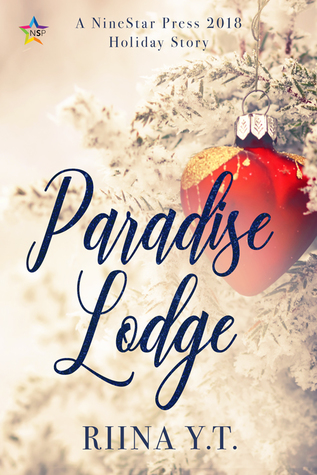 If you’re like me who’s  looking for something to read over the holidays – then look no more because I’ve got you. I mean, NinePress Star will be releasing a holiday anthology that is surely going to tickle your boy to boy – men 2 men romance fantasies! That doesn’t sound dirty at all, is it? Haha!

Let me present to you of course the first story I’d be reading in the series – it is from one of my favorite people from Europe! 💙 From my good friend Riina Y.T. who wrote the very charming Spring, Bax and Butterflies and the super adorable Blame the Fireworks comes Paradise Lodge.

Azariah Bell is a nervous wreck. He isn’t prepared to spend the final week of the year with his best friend, Ky O’Sullivan, lead vocalist for their pop rock band, Moving Insignia—especially after the fight he caused before they parted ways two weeks ago.

Afraid of not being taken seriously by Ky, Azariah was concerned about what confessing his feelings would do to their friendship, or the band. He tried to keep his emotions in check, but instead, he exploded in anger over some petty issue, and now he’s potentially lost Ky forever.

Ky is looking forward to the band’s annual writing retreat for a week of songwriting and recording at a secluded mountain resort. Spending Christmas with his family gave Ky time to reflect on how he’d handled Azariah’s epic meltdown. It wasn’t good, and Ky is determined to uncover the true nature of Azariah’s unusual behavior. They didn’t keep secrets from each other, or so he believed.

Expecting to see the rest of the band when they arrive by helicopter, Ky and Azariah are shocked to learn they are alone at a deserted lodge. When they discover they’ve been set up by their bandmates so they can “sort it out,” their choices are few. But it’s critical for them to resolve their problems if they have any hope of enjoying the new year together, let alone make that new album happen.

I am super-excited to  read this one and enjoy it as much as I’ve enjoyed SBB and Blame the Fireworks!!!!

Paradise Lodge will be release on December 3, 2018 by NineStar Press.

About The Author
Riina currently resides in Germany. She spent countless exciting days in the UK and US and lost her heart in Tokyo.
She would be thrilled if one day her stories could brighten someone’s day in the way those beautiful romances always lighten up her dull everyday life. Riina is looking forward to sharing many more stories with the world.
When she doesn’t daydream about boys in love, and isn’t glued to her Kindle, Riina loves to travel the world and explore the unknown.
Website: http://www.riinayt.wordpress.com

This entry was posted in Authors, Books and tagged Paradise Lodge, Riina Y.T.. Bookmark the permalink.