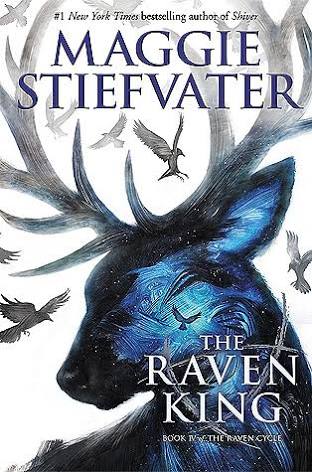 Blurb: All her life, Blue has been warned that she will cause her true love’s death. She doesn’t believe in true love and never thought this would be a problem, but as her life becomes caught up in the strange and sinister world of the Raven Boys, she’s not so sure anymore.

Let me start this review by saying this is definitely one of the best series’ I’ve read in years and let me tell you that I’ve read a lot of them from different genre.

The Raven King as the series’ last installment is a fitting conclusion but it’s definitely far from being over. Now, this is a good thing I think. We’re given a very thick plot that will leave us yearning for more. Some readers may find that off-putting but I am actually satisfied with the way the author ended their quest. Their whole journey also felt longer because of everything that has happened since Blue and the Raven boys laid eyes upon each other.

I think the best thing about this last book and the series in general is its character development. In such a short span of time, as per the series’ timeline, we got to know a lot of characters aside from Gansey, Ronan, Adam, Noah and Blue. The most interesting for me would have to be Mr. Gray – I just loved him. Such a fascinating character since his appearance in The Dream Thieves. I’d definitely read a standalone story about him.

Now, I’ve read some reviews stating they find the ending a bit rushed which I tend to agree to some degree but I do think that it doesn’t lessen the fact that it is still a good ending. That conclusion is basically begging for another book, another story involving our main characters.

I’d love to read more from these guys especially about their lives after Glendower. Will Blue be able to travel the world? Will Gansey become the politican he was groomed to be? Will they end up together? Will Ronan and Adam stay together and all that stuff… Just a lot of possibilities.

About The Author
New York Times bestselling author of The Shiver Trilogy, The Raven Cycle, and The Scorpio Races. Artist. Driver of things with wheels. Avid reader.

All of Maggie Stiefvater’s life decisions have been based around her inability to be gainfully employed. Talking to yourself, staring into space, and coming to work in your pajamas are frowned upon when you’re a waitress, calligraphy instructor, or technical editor (all of which she’s tried), but are highly prized traits in novelists and artists. She’s made her living as one or the other since she was 22. She now lives an eccentric life in the middle of nowhere, Virginia with her charmingly straight-laced husband, two kids, two neurotic dogs, and a 1973 Camaro named Loki.

This entry was posted in Others and tagged Book Review, Maggie Stiefvater, The Raven Cycle, The Raven King. Bookmark the permalink.