Manny Pacquiao Views On Gay People and Same-Sex Marriage : “… Are Worse Than Animals.” 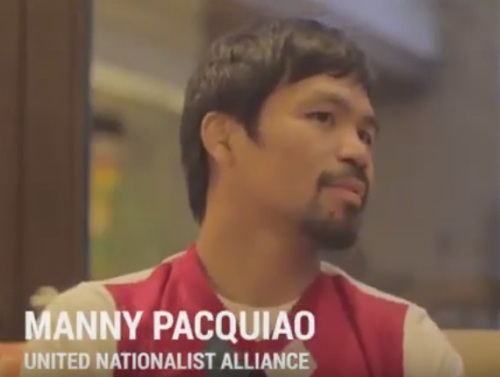 A new video is being shared and talked about all throughout the social media at the moment about the new tirade of Filipino world boxing champion Manny Pacquiao on same-sex marriage and homosexuality in general.

If you recall, Pacquiao was mistakenly quoted in May 2012 when he supposedly remark that “gay men should be put to death.” The writer of the article later retracted and claim the quote was not from the boxer.

Pacquiao however has a very strong opinion about the issue stating, “God only expects man and woman to be together and to be legally married, “It should not be of the same sex, so as to adulterate the altar of matrimony, like in the days of Sodom and Gomorrah.” on a 2012 interview with the National Conservative Examiner.

Oh, and he’s running for Senator this coming election. Your thoughts?

On a more positive note, Manny recently shared on his social media accounts the free houses he built for his constituents in Sarangani Province! Kudos to you Manny for doing that and spending “your own money” for the project.