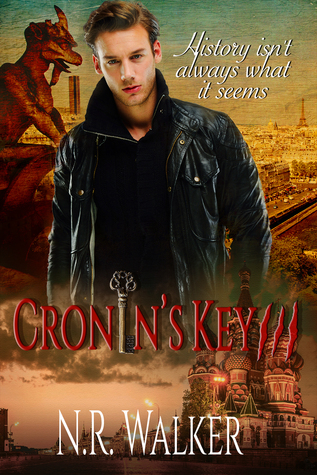 It’s always a pleasure reading one of N.R. Walker’s books especially something that is part of a series. This one’s obviously the third in her vampire series’ Cronin’s Key and it’s just as wonderful as the rest of the series.  Here, we see how Alec’s adjusting with all of his newly acquired vampire powers – powers that most vampires would give anything to have. Then enter the Zoan, half-lycan, half-dragon creatures that wanted to unleash evil in this realm with Alec’s help.

This one’s an easy read. There’s still that wonderful chemistry between Alec and Cronin (and Alec’s less talkative this time and became grouchy instead – LOL). There are characters here aside from Alec and Cronin that made me want for more books in the series. Kennard is one of them. I just loved him! He seems fun and he’s really funny with all his snarky banter! Another is Jacques! There seems to be an interesting back-story in there about this French vampire.

My one bit of criticism about the story is how big the whole vampire chaos has become. It’s like they’re literally trying not to be discreet about their “society,” – I mean, it’s almost disconcerting how Alec was being reckless about being seen and all. But hey, that’s just for me. I thought the whole story as a whole was more “focused” in terms of the plot lines this time despite the info overload about gargoyles. You will see what I mean with this one but I’m pretty sure that it’s also not going to be a big deal for you.

The ending was not what I’ve expected – It’s nothing shocking but I was hoping that we’ll see more of that “little guy” in the future if there are more books to come. Nevertheless, I thought the whole deal about the Key completing his quest was a perfect closure into their love-story. Seriously, N.R. Walker needs to write a companion series with Kennard or Jacques as its main characters. Highly Recommended.

About The Author
N.R. Walker is an Australian author, who loves her genre of gay romance.
She loves writing and spends far too much time doing it, but wouldn’t have it any other way.

She is many things; a mother, a wife, a sister, a writer. She has pretty, pretty boys who live in her head, who don’t let her sleep at night unless she gives them life with words.

She likes it when they do dirty, dirty things…but likes it even more when they fall in love.

She used to think having people in her head talking to her was weird, until one day she happened across other writers who told her it was normal.

She’s been writing ever since…