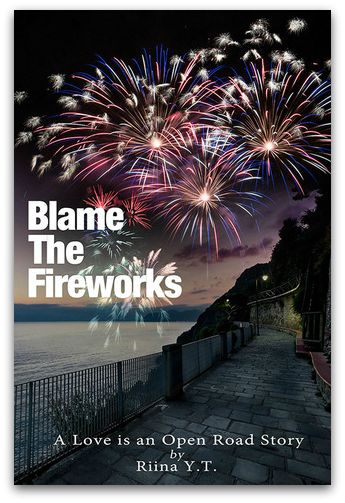 This story was written as a part of the M/M Romance Group’s “Love is an Open Road” event. Group members were asked to write a story prompt inspired by a photo of their choice. Authors of the group selected a photo and prompt that spoke to them and wrote a short story.

My roommate’s brother is visiting again and sleeping on our couch. I tiptoe around and pray I don’t run into anything or cause a clatter that would wake him. All knees and elbows, that’s me— while he’s all strength and grace. Looking at him, I can’t help my wistful sigh. He’s beautiful, but that’s not it. It’s his gentle smiles and kindness. Unlike everyone else, he doesn’t treat me like I’m one stumble away from being declared a walking disaster zone.

Unfortunately, he also treats me like a kid brother. He ruffles my hair and calls me ‘kiddo’. I wish I wasn’t so awkward. I wish I was sexy so he’d want me the way I want him. I wish I was the one he dreamed about as he slept on the couch.

I was already expecting this story to be all mushy and stuff based on the given prompt and I wasn’t wrong. Harlie and Tabby are just all kinds of adorable!

Harlie’s totally into his roommate’s brother Tabby. The latter is gorgeous, graceful and kind while he’s alright in the looks department, a total klutz and totally not like Tabby. But that’s not how Tabby sees him.

When Tabby unexpectedly dragged Harlie for a little summer road trip, both discovered something they shared in common and harboring for the longest time…

I wished the ending was longer and not rushed but I’ve a feeling that there’s more to these two waiting for us.

I wouldn’t mind getting it sooner 😉

About The Author
Riina currently resides in Germany. She spent countless exciting days in the UK and US and lost her heart in Tokyo.

She would be thrilled if one day her stories could brighten someone’s day in the way those beautiful romances always lighten up her dull everyday life. Riina is looking forward to sharing many more stories with the world.

When she doesn’t daydream about boys in love, and isn’t glued to her Kindle, Riina loves to travel the world and explore the unknown.

This entry was posted in Books and tagged Blame The Fireworks, Book Review, Love is an open Road, MM Romance Group, Riina Y.T.. Bookmark the permalink.

One response to “Book Review: Blame the Fireworks – Riina Y.T.”