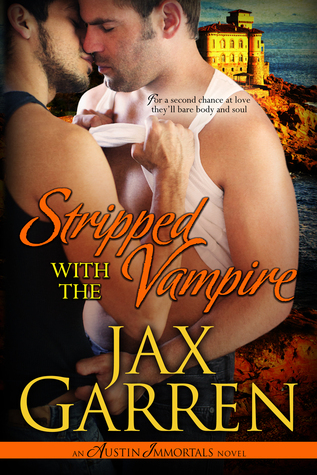 Blurb: Shy vampire Charlie never intended to see Vince again after the bad boy human broke his heart. But when Vince turns up beaten and marked for sacrifice to an Aztec God, Charlie will do anything keep him safe.

Vince has never forgiven himself for the lie that ended things with Charlie. The spark between them is as hot as ever, and Vince would risk body and soul to make it a fire again. But as they hide deeper in Austin’s supernatural society—a world of lies, dark magic, and warring immortals—he finds the path to reconciliation more twisted than he’s ever imagined.

I’m a big fan of vampire stories because I’m always fascinated with how each author creates their version of these creatures. This one though isn’t straying too far from the mainstream vampire that we’ve come to know – their fear of sunlight, the vampire royalties, their creation, beauty, wealth, fangs and all. So there’s really nothing new in that regard.

While I appreciate the interchanging POV between Charlie and Vince here, I honestly didn’t feel that much connection from Charlie – like he’s not there at all. When I read the blurb about Charlie being a shy vampire – I thought that would be cute for the story but on the onset of his introduction, the shy vampire was actually a spineless one. So needless to say, it’s a good thing that he’s almost invisible in the story. He’s adorable but annoying at the same time.

I also didn’t get Vince’s logic about his job. It’s almost too immature, IMHO. The interesting part is that he’s actually diabetic and that gave the story a unique take on becoming a vampire or not. I loved that he was very adamant with his decision. And that one is rather refreshing If I may say.

Overall, the story was kind of messy if not predictable. It was also too long for such a premise. I still think that this couple needs a second book because their HFN story isn’t very appetizing for the series.

Given that this is the author’s first foray into the MM genre, I really do commend her effort. It needs some work on the man-on-man action but otherwise, the romance was still there.

I’d read the next book in the series only if I’d get to read more of Charlie and Vincent.

This entry was posted in Others and tagged Austin Immortals Series, Book Review, Jax Garren, Stripped With the Vampire. Bookmark the permalink.