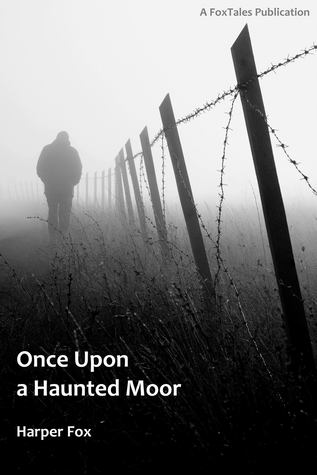 A young girl has gone missing in a small village called Dark on Bodmin Moor in Cornwall where folklore is part of its people’s daily lives. Gideon Frayne is their village policeman who easily blames himself for this disappearance under his watch. Then came the clairvoyant Lee Tyack contacted by Truro HQ to help the search which doesn’t sit well with Gideon.

Although doubtful at first, Gideon finds himself working together with Lee who happened to awaken some feelings he’s been trying to hide for years. As they work against time to find the girl, Gideon discovered more about the terrifying legend of their village and the terrifying thought of losing the man who’s found its way into his heart.

I became a fan of Harper Fox after reading Brothers of the Wild North Sea and two of her short stories entitled Life After Joe and Nine Lights Over Edinburgh. I loved her writing style – lyrical, commanding and very relatable. I loved the vividness of her characters. In Once Upon A Haunted Moor, Harper Fox gave us Gideon and Lee – two undeniably likable characters bearing something unique in them. Gideon is pragmatic, stoic at times and being a closeted law enforcer gives him an extra edge. His character is never unlikable anywhere in the book. Here’s a strong man who will do everything as long as he thinks it’s the right thing to do. Lee on the other hand was still a mystery in this book. He’s great but I didn’t get much from him – which I think suited the narrative well. Gideon was the one telling the story and his inner monologues at times makes you smile, frown and sometimes you just want to give him a big bear hug.

The story itself has this spooky feel about it with the folklore about the Bodmin Beast and the Halloween season as part of the story – it’s just perfectly balanced. I loved that it’s somehow predictable but you kind of expected that already making it okay instead of having a totally twisted conclusion that doesn’t make sense at all.

The partnership of Gid and Lee is an easy read and I’d definitely read more from there. As usual, another great book – and a series starter from Harper Fox! Congratulations!

This entry was posted in Books and tagged Book Review, Brothers of the Wild North Sea, Harper Fox, Life After Joe, Nine Lights Over Edinburgh, Once Upon A Haunted Moor, Tyack & Frayne Series. Bookmark the permalink.

One response to “Book Review: Once Upon A Haunted Moor (Tyack & Frayne #1) – Harper Fox”