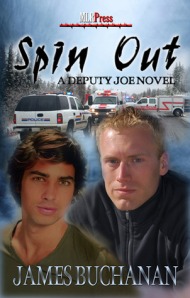 Deputy Joe Peterson understood the risks when he got involved with ex-con Kabe Varghese. He didn’t, however, see fit to warn Kabe. Now, in the middle of searching for the killer of a local boy, he has to contend with his career and his relationship spinning out of control. Solving the case may be easier than repairing broken trust.

After Deputy Joe came out of the closet and was excommunicated by his church, he’s now trying to move on with his life making some major adjustments. He’s now very much involved with ex-convict Kabe Varghese and is trying to make things work with the guy. This was a really good follow up to Hard Fall. The story is more dynamic and we learned more about the couple. I really enjoyed the crime-solving side of this series; it’s very CSI and much more focused this time around. I noticed though, a subtle shift to Kabe’s character. He seemed less masculine compared to his bad-ass characterization in the first book. I really loved it when Dev’s character made an appearance. That hotel room scene with him and Joe was almost sensual. I was like, c’mon guys – just freaking do it already! The other side of my brain though, was like “Joe, you don’t wanna do this to Kabe!!!”. I’m very much happy with it but I’m still uncomfortable with their semi-BDSM set up. Nevertheless, I’m still looking forward to get my hands on the third book of the series. ‘never thought I’d like this series this much.