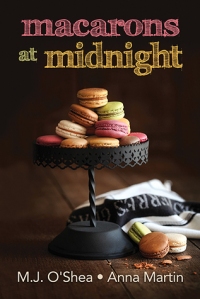 I’ve read this a few days after its release in October and tried to reread it this month – I always love me some cute story from M.J. O’Shea. This one though she co-wrote with Anna Martin, author of the Tattoos & Another Way series. I just loved this book! It’s just cuteness overload!!! It’s about Tristan Green, an English lad who landed in Manhattan for a job at a high profile ad agency. Unable to get a life out of his mundane routine, he found himself meandering over Henry Livingston’s bakery one night. Henry is the owner of a cutesy bakery and was also a renegade child who grew up in the Upper East Side but got so fed up so he decided to ditch his “old money” family and be a baker.  It started as a taste-testing flirting that developed into a sweet and oh-sexy romance that may just be the one thing that they both needed. All things crumbled, though, when Tristan’s work made him do something that could end all ties with Henry.

Don’t you just love reading an easy, breezy story that’ll leave you giddy and smiling from ear to ear after? That’s what I felt like after reading this book non-stop. Just effortlessly non-stop. Tristan and Henry are both lovely characters carved from the chic-flick mold. They’re just lovely and Tristan’s accent – really, I could hear it in my head!  I just love the easy chemistry between these two and how the story just stayed low-key all throughout without making it overly dramatic what with all the family and work fiasco involved. This is a really good book to pass the time – I usually say this when the book’s not really worth your precious time but this book IS worth it and would be a great company whilst relaxing and getting all cozy at your reading nook.

About The Authors
Anna Martin is from a picturesque seaside village in the south west of England. After spending most of her childhood making up stories, she studied English Literature at university before attempting to turn her hand as a professional writer.

Apart from being physically dependent on her laptop, she is enthusiastic about writing and producing local grassroots theatre (especially at the Edinburgh Fringe Festival, where she can be found every summer), travelling, learning to play the ukulele, and Ben & Jerry’s New York Super Fudge Chunk.

Anna claims her entire career is due to the love, support, pre-reading and creative ass-kicking provided by her closest friend Jennifer. Jennifer refuses to accept any responsibility for anything Anna has written.

M.J. O’Shea has been writing romance since algebra class in sixth grade (when most of her stories starred her and Leonardo DiCaprio). When she’s not writing, she loves listening to nearly all types of music, painting, reading great authors, and on those elusive sunny days in the Pacific Northwest, she loves driving on the freeway with her windows rolled down and her stereo on high.

She can be contacted at mjosheaseattle@gmail.com