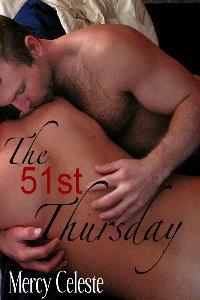 Shelby Bainbridge, former championship winning quarterback and son of an Alabama Senator with presidential aspirations, lost everything one Thursday night fifty-two weeks ago. Lost, alone, battered, and broken Shelby finds comfort in the local bar called Deacon’s Place. Week after week, he finds himself drawn to Deacon’s for the beer, for the atmosphere, for the solace and for Deacon himself.

Deacon can no longer deny the desire he feels for the man he calls Thursday. When Deacon wants something Deacon is a hard man to resist. The problem is, Deacon never planned to lose his heart. Especially to a man who could be destroyed by an unexpected night of forbidden passion. via Goodreads

First, I may have expected too much after reading the surprisingly good story of “Behind Iron Lace” but don’t get the wrong idea that this isn’t any good at all. The main characters are actually very interesting; perhaps too interesting that the story’s shortness didn’t do them much justice at all.
This would’ve been a great full-on novel but alas, it was reduced to something that feels like it has no conclusion at all.

This entry was posted in Others and tagged Book Review, Mercy Celeste, The 51st Thursday. Bookmark the permalink.