Tag Archives: This Other Country

Book Review: This Other Country (More Heat Than the Sun, #4) – John Wiltshire 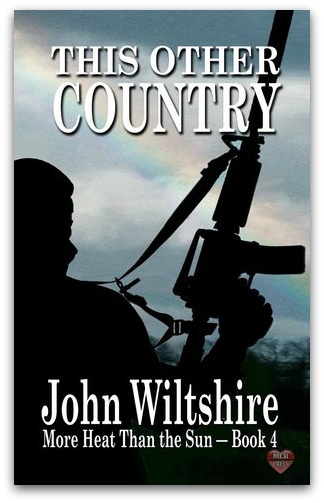 This is the fourth book of the amazing series More Heat Than The Sun and I am still enthralled by the author’s writing and depiction of his main characters Nik and Ben from the first three books that this actually came a bit of a surprise for me – it’s a rather brow-raising surprise because I’ve this pet peeve about my characters which I’ll try to discuss in a bit.

Anyways, This Other Country saw the very dignified Nikolas Mikkelsen admitting himself into a gay therapy course for Ben’s sake (he’s with Ben here). And for Ben’s stupid friend Squeezy.

I actually find the whole thing quite amusing at the beginning – Nik being Nik – you just gotta love the guy’s snark! Despite his entire strong exterior, he’s really got a soft spot most especially for Ben.

This time, the story’s not divided into two arcs – it’s a continuous one with the initial premise being the gay therapy session. It’s clearly over the top but again, in a good way.

What happened after the therapy was something I wasn’t expected to come out of this book. Something that will tick-off some readers off of some characters most especially Kate. After reading that “scene” – I went ahead and plan for her demise right away. It was gulag style I reckon. I hate that part. I don’t like it at all and it makes my heart palpitate. I was so mad that Nik was so lenient and understanding towards Ben. I cried for Nik because it was so unfair for him. The author needs to make Ben grovel better come next time because it’s always Nik who’s left crying in the corner – with his gun and stuff for killing. I’m totally disappointed with Ben and I could already see where this will be heading – ugh. I’m calling this installment “Kate Must Die” –Arrrrgggghhhhhhhhhhhhhhhhhhhhhhhhhhhhhhh!!!!!!!!!!!!!!!!!!!!!!! When are the gulag prisoners when you need them?

This book is still great like the rest of the series – with some disappointments that is, but seriously, the writing was so good that it’s unfair to say that I hate it just because what I want to happen with the characters were unrealized.

About The Author
John Wiltshire spent twenty-two years in the military, perfecting the art of looking busy whilst secretly writing. He left as a senior officer when his tunnel was ready for use. He is now living in New Zealand until he can raise enough money to leave. Although he has no plans to return to the army, he can occasionally be caught polishing his medals.