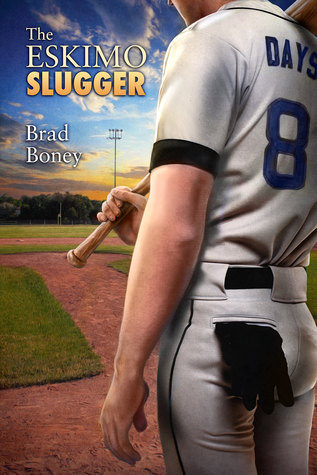 The Eskimo Slugger left me speechless hours after reading it. I mean, WOW. I kept repeating everything I’ve read in my head. Long after the book’s conclusion, I’m still thinking about Trent Days and Brendan Baxter and it was like a time warp that my mind went back to the setting and the characters of the book’s accompanying novels – The Nothingness of Ben and The Return. I’ve mixed emotions about this book. It made me sad, nostalgic, happy, and peaceful and a bucket full of fierce feelings I’ve never thought I’d feel for a book since reading The Lonesome Dove [Larry McMurty] and Beach Music [Pat Conroy] years ago.

It’s the summer of 1983, and Trent Days born to an Inupiat Mother in Alaska was dubbed by the press as the Eskimo Slugger for his sensational record at the Major Baseball League. His rise to the top was halted by a midseason collision that sent him back to Austin to recuperate. When Trent visited his favorite record store, he met the eager and funny law student Brendan Baxter. A skip on a record vinyl sent him back to the store and to Brendan that led to a date and a blossoming romance. Trent is torn into choosing between his growing feelingsfor Brendan and his professional sports where his secrets won’t and cannot be revealed.

If you’ve read Brad Boney’s previous two novels (The Nothingness of Ben and The Return), you’d definitely see the parallelism used to connect each character and each event. Of course it’s not so much of a parallelism if one will take into account the theme used via The Return (I’d rather leave it like this because I really want you guys to get hold of these books!). One can also mention the beautiful juxtaposition of Trent & Brendan characters with “Travis & Ben” of The Nothingness of Ben. The whole mixed up was just a wee bit nostalgic and sometimes even jaw dropping. I was mentally screaming, Oh shoot! Shoot! – Brad Boney is killing me with this!!!

I guess the beauty of this book relies upon the well-constructed development of the story. It started with Trent and Brendan’s first meeting, how they easily got along, the meeting of each other’s friends and its conclusion that was beautifully woven into another time. It’s also a great feeling to see characters from his previous books. It’s like I’ve known these people in my life and knowing their story makes me yearn for more – it makes me ask more question, makes me want to go back and reread that particular chapter / page.  This fantasy was transcended by the timeline used from the author’s first book up to this one. A clever style of writing that takes each miniscule detail into consideration and I so loved that about Brad Boney.

I’ve always mentioned that The Return has a very special place in my heart for some reason. I guess, looking back – it’s always the quality of Brad Boney’s writing that made me say this. The Nothingness Of Ben was nothing short of awesome. The Return will always be like my favorite toy but The Eskimo Slugger is the perfect example of Brad Boney’s artistry. That man’s a genius!

About The Author
Brad Boney lives in Austin, Texas, the 7th gayest city in America. He grew up in the Midwest and went to school at NYU. He lived in Washington, DC and Houston before settling in Austin. He blames his background in the theater for his writing style, which he calls “dialogue and stage directions.” His first book was named a Lambda Literary Award finalist. He believes the greatest romantic comedy of all time is ’50 First Dates’. His favorite gay film of the last ten years is ‘Strapped’. And he has never met a boy band he didn’t like.

I’ve had a hard time coming up with a proper review for this book. It’s just so special to me that I feel like limiting it with the good words I could say about it won’t suffice at all. Aspiring rock star Topher Manning (who first appeared in The Nothingness Of Ben) had a weird but surreal field day when he met Stanton Porter, a music critic from New York who’s in the small town of Dime Box in Austin for a music festival. With luck on his side, he was offered a ticket to see Bruce Springsteen which led to a whole lot of possibilities that neither he nor Stanton ever expected.

I really do love how Stanton’s past and future clashed in the story. The retelling of his past gives me this almost nostalgic feeling especially with the talks of music, Stanton’s early college days, his friendship with Marvin and the guys and his relationship with Chris / Hutch. I’m not even sure how I got through the end crying like a baby with what has happened with his friends and with Hutch. It was just unbelievably sad. [yeah… a bit spoiler-ish]

I also fell in love with Topher here. That guy is the cutest thing ever! I loved his personality and the exuberance of his youth towards Stanton is just too adorable. He’s the perfect book boyfriend if you ask me – sweet, sexy, smart, sensitive and cute rolled into one!

I thought the whole reincarnation thing was sad and beautiful at the same time. There’s this one particular scene where I have to stop and tear up when Topher asked Stanton if he minded Maurice calling him Stan. Stan then answered, “Maurice can call me whatever he wants, he was always my favorite” (referring to Michael)

I also loved the fact that this book was musically well researched and the extensive pop culture reference was so good it’s almost overwhelming. One of my favorite moments in the book was the greatest games scene – both games played in the past and the present (Topher’s time.)

You see, The Return is one of those books that have its own magic. It has its own power and that something special that would stay with you for the longest time. It’s the perfect book to bring when soul searching or when you want to laugh or cry. The Return will give you all the options – pull different emotions out of you. If you liked The Nothingness Of Ben, The Return would be the perfect follow up. It’s just…. perfection. Again, thank you Brad Boney for writing this amazing piece of gem.

About The Author
Brad Boney lives in Austin, Texas, the 7th gayest city in America. He grew up in the Midwest and went to school at NYU. He lived in Washington, DC and Houston before settling in Austin. He blames his background in the theater for his writing style, which he calls “dialogue and stage directions.” His first book was named a Lambda Literary Award finalist. He believes the greatest romantic comedy of all time is ’50 First Dates’. His favorite gay film of the last ten years is ‘Strapped’. And he has never met a boy band he didn’t like.