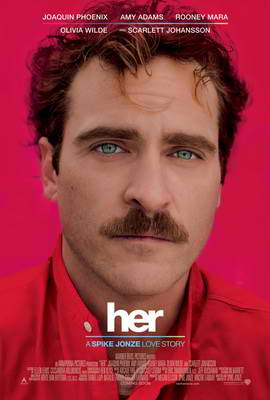 Her without a doubt should be considered as a frontrunner for Best Original Screenplay for the Oscars. Its premise of falling inlove with a machine (an operating system) was a reminiscent and was very much like the obsession of Al Pacino’s character to Simone. This film however took a direction very different from the latter. The year was 2025 and Theodore Twombly (Joaquin Phoenix), someone who writes under a company named beautifulhandwrittenletters. Theodore was in the brink of divorce with his wife Catherine (Rooney Mara) and was desperately in need of company until he met the OS which he named Samantha. Together, they talked about love and life with Theodore seeking love advise from Samantha (Scarlett Johansson) which eventually led to them falling in love with each other.

Now this seemed to be a bit out of order, yes? But you gotta remember that it’s the year 2025 and falling in love is yes – that simple. Funny thing is, since Sam’s a microchip the two cannot have sex – an indication that the relationship to work in the long run is impossible and there can’t be no physical human connection that could transpire.

The premise may not seemed original at all but it’s charming and has character. Director Spike Jonze delivered a passive yet arresting sequences of events that is both endearing and unique.