Miss Filipinas Teresita “WinWyn” Marquez is the Winner of #Reinahispanoamericana2017

After Karen Ibasco grabbed the Miss Earth title last night, Teresita Ssen Marquez or better known in the Philippines as Winwyn Marquez has won the hearts of the judges and the people of Bolivia by winning the 2017 Reina Hispanoamericana. This is also the Philippines’ first participation in the pageant and also the only Asian country to be invited to participate! What a feat! Congratulations Winwyn! 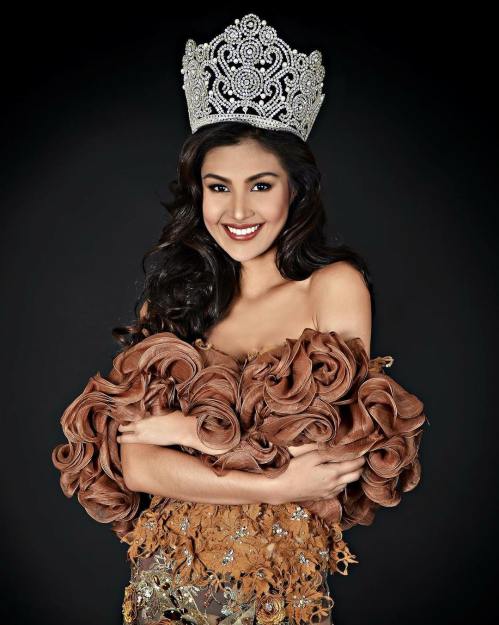 Make up by the one and only @fannytfserrano  : Fanny Serrano “Cinematique Touch” :Lawrence Leuterio : Rosvic Castro

Here’s her winning answer during the Q&A portion of the pageant:

Although lacking Spanish fluency, Winwyn’s charm is still winning judges and sponsors left and right in the on-going pre-pageant activities. She recently won the title of Miss Ipanema and was adjudged 1st runner-up Miss Personality.

Do you think Winwyn will win the crown on Saturday?

Now, this is what I call a well-thought-out national costume departing from the usual Filipiniana we’re all used to seeing in the past.

This intricate creation was also chosen as one of the Top 3 National Costumes along with the costumes of the delegates from Venezuela and Panama.

Make up by the one and only @fannytfserrano  : Fanny Serrano “Cinematique Touch” :Lawrence Leuterio : Rosvic Castro

The international pageant season has begun and to start off my pageant-related posts, I’d like to ask you guys to support Teresita Ssen Winwyn Marquez – our first ever representative to the very competitive Reina Hispanoamericana which will be held in Bolivia on November 4!

All you need to do is go to the official Facebook Page of Reina Hispoanoamericana – simply click the name of the pageant or the image below. 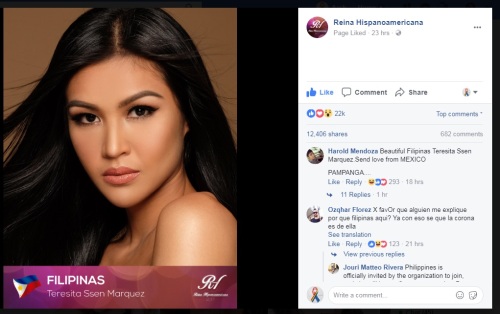 The Reina with the highest votes will automatically advance to the semifinals! So ano pang hinihintay niyo? Boto na!

My Thoughts on the Miss World Philippines 2017 Coronation Night 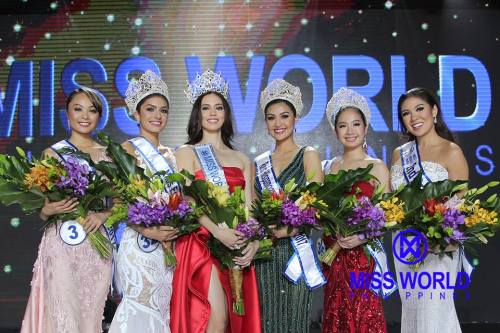 I’ve been regularly checking updates about the new Miss World Philippines franchise since Madam Cory Quirino ended the contract with the Miss World Organization and the controversy-laden pageant is now under the helm of Arnold Vegafria  as its new National Director.

I’ve only followed the rest of the proceedings through social media and I’ve only seen a couple of them in person. Interestingly enough, it was the eventual top 2 – Laura Lehman whom I had a close encounter with during the press conference of the 2014 Binibining Pilipinas Winners and Teresita Ssen Marquez whom I’ve seen live during the Binibining Pilipinas 2015 proceedings.

I’ve watched the finals thru a live streaming on Facebook and the very delayed telecast on GMA 7. The show was hosted by Carla Abellana, Iya Villania-Arellano, KC Montero and Miss World 2013 Megan Young.

I really loved Carla doing this kind of gig. She’s so eloquent and calm. Some may find her boring but I actually find it refreshing since this is the kind of beauty pageant that’s more on the subdued side. 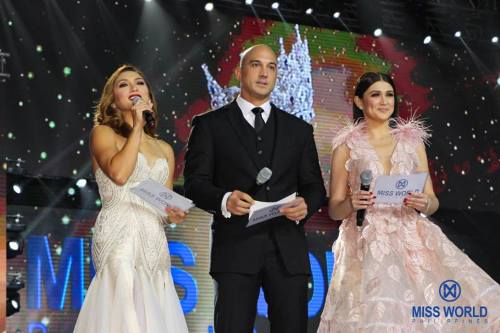 Iya Villania on the other hand was her opposite. She’s a seasoned emcee as well as KC Montero so it’s not surprising that they’d do well.  Somehow they balanced out Carla’s calm demeanor in hosting. 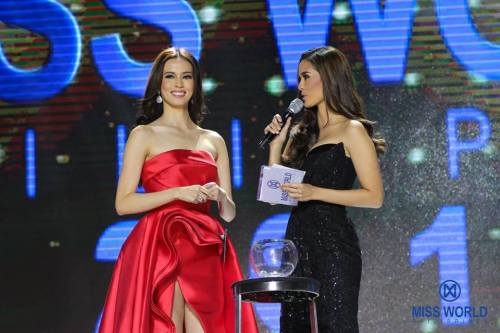 Megan during the Top 10 Q& A with the eventual winner of the top plum!

Miss World 2013 Megan Young facilitated the final question and answer portion of the event and she was her usual charming self! She should host all of our national beauty pageants to be honest! She’s so good!

The Top 15.
The favored quartet at this point: Laura, Teresita, Cynthia and Janela all made it through.

#15 – Laura Victoria Lehmann – Laura’s gift of gab sealed the deal for her after battling Cynthia and Teresita all throughout the night, it all came down to this very crucial question and answer portion. Her answer reminds me so much of Lara Dutta’s answer during the Miss Universe 2000 in a roundabout way.

#9 – Teresita Ssen Marquez – She’s my favorite from the get go but I guess Laura got majority of the judges favor since Wynwyn’s sweet and somehow very “rehearsed-sounding” answer fell short. It was still one of the best answers of the night though and she looked absolutely ravishing!

#32 – Cynthia Thomalla – If she had delivered her answer with confidence, she could have gotten the top plum because, damn girl is so effervescent on stage! I need to see her on a Binibining Pilipinas stage in the future!

#35 – Sophia Señoron – She gave a very good answer but I think what the judges saw in her is her sincerity more than anything else. It’s obvious that she’s real smart and still looks very young but there’s something about her that is very charming thus usurping early favorites for the four crowns at stake.

#3 – Glyssa Perez– She gave a really good albeit a forgettable answer.

#24 – Zara Carbonell – She’s very eloquent and I loved her styling! She probably just fell short of votes from the judges to win one of the crowns.

#28 – Sheila Marie Reyes – There’s really nothing wrong with religious-themed answers but it tends to not go well with the audience especially in beauty pageants. It’s just so pageant patty.

#6 – Jona Ili Sweett – She had one of the most difficult questions in my opinion. Cmon’ she’s not Mother Teresa.

#14 – Cristina Marie Coloma – She’s pretty enough and her answer was okay but just not strong enough.

#26 – Janela Joy Cuaton – I loved her but her answer for me was the weakest.

After the incident last year in the US when our dear Catriona was robbed of a crown (yes, please you haters we all know she was fucking robbed so shut your trap), a lot of Filipino pageant fans were outraged and right at this moment (including moi) are still mad as hell so what do I think of Laura’s chances in Sanya, China this year? I think she’d do well this time. For one, Julia Morley is eager to please the Filipino pageant fans and pundits again. Philippines after all is her “favorite country” *rolls-eyes*.

One more thing going for Laura’s favor is the sudden political upturn of China and the Philippines’ relationship. Even if you think our on and off rift with China wasn’t a factor in the past – think again. I still think that it plays a part for our delegates – can you believe that? A beauty pageant! Haha!

Lastly, Laura may not be as well-rounded as Catriona but she’s a very worthy delegate. She got the beauty and the brains. Let’s just hope that Lola Julia will favor her come Miss World this year.

She will be the first Filipina to participate in the Latina-dominated pageant and it’s not an easy task for her but knowing WynWyn, I know that she’d do her best to learn Spanish and impress everyone the way she did in the national pageants back in 2015 and this year.

Miss ECO Philippines 2017 #32 – Cynthia Thomalla. No comment. She should just resign and join the Binibining Pilipinas 2018. Kidding! I’ve no idea about her pageant but she’d be sent out to Egypt! Pretty swell if you ask me! A free trip and if she end up winning it! Double whammy!

Miss Multinational Philippines 2017 #35 – Sophia Señoron. Congratulations! Not very sure as well about her pageant assignment but she’s be shipped to India for Miss Multinational. I hope she’d do well!

Lastly, thank you my dear Catriona – you made us proud in your journey with or without a crown – you are still our Miss World ❤

What are your thoughts on the winners this year?