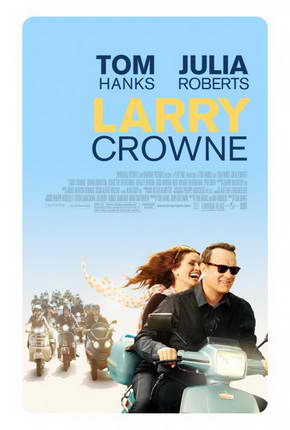 I have always been a huge fan of Julia Roberts and her works so I was very excited to watch this film directed by her co-star Tom Hanks whom I equally adore as an actor. The whole scenario of the film is about Larry Crowne, an ex-Navy played by Hanks who got fired from his job because he lacks college education despite his good performance at work.

Losing his job and almost losing his home, Larry decided to enroll at the community college to get an education. There he met his unhappy married teacher Mercedes (Roberts) whom he immediately fell inlove with.
For some reason, I find the plot a bit too boring and very much ordinary. It only offers a bit of humor that I did not expect from Julia Roberts and Tom Hanks! I was maybe expecting some witty lines to come from them. Instead, the scenes of economic professor Dr. Matsutani played by George Takei entertained me more.
It’s still an okay film to say the least. I mean, both Roberts and Hanks are still very charming but it is just not a very spectacular one. After watching it, it’s like – so that was it? It’s like I kinda wasted my money on watching it. This directorial stint of Hanks isn’t what I’ve expected to see. There’s too much unnecessary lines and scenes! However, I still commend the way Tom Hanks effectively portrayed Larry Crowne as described in the film, it’s just too bad that everything about it is forgettable.
Director: Tom Hanks
Starring: Tom Hanks, Julia Roberts, Cedric the Entertainer, Taraji P. Henson,
Rating: 4 out of 10
This review was first posted at www.pinoyexchange.com
Please read more film reviews at PINOY EXCHANGE Official Pex Moview Reviews