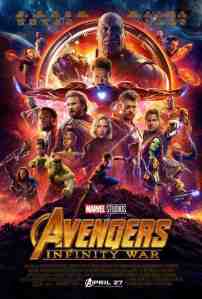 The Avengers and their allies must be willing to sacrifice all in an attempt to defeat the powerful Thanos before his blitz of devastation and ruin puts an end to the universe.

I was not supposed to watch this. I was thinking that I won’t be able to fully understand the story because I haven’t watch the most recent Marvel films prior to this and I’m not a Marvel fanboy to begin with. But yeah, it is the only available flick that coincides with my schedule so I decided to check what the ‘hype’ really is all about.

The movie boasted grand and scenic special effects, is action-packed and most importantly, it wasn’t boring. See, it’s more than two hours and the film was able to sustain the excitement from start up to the end-credits. The great thing about watching it on IMAX 3D is that it feels like you’re part of each scene yourself. I just noticed that the 3D effect isn’t as crisp as I expected it to be. There are parts of the film that they may have forgotten to convert into 3D.

I’ve to praise the wonderful casting as well. I mean, we’ve known most of them from their individual films but you cannot deny the great chemistry between these bevy of A-listers and B-list celebs.

The story kind of make sense in a way that it connects the individual movie installments and it also makes you want to watch them again because each one did their job wonderfully.

I am really excited to watch what will happen next. And no, I won’t be reading its comics or the Avengers wiki-page. I think I could wait for the 2019 release of the next film.