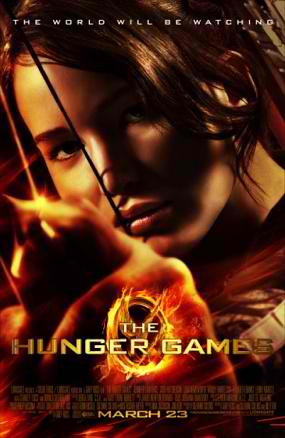 I was not even aware of this book until last year when news erupted about its film adaptation. Suzanne Collins, author of the book wrote the screenplay of the film along with director Gary Ross and Billy Ray. There are likely many who have not read the book and do not know their Panems and Districts. Panem is the name of the nation that has risen from the ruins of once then North America. The people from its 12 Districts are subject to select one boy and one girl to participate in the annual ‘Hunger Games’ taking part in a battle where there is only one participant who will emerge as the winner. The Hunger Games is a televised reality show complete with sponsors and commentaries. This, according to the ‘Capitol’ leaders serves as a reminder of the people’s failed uprising against them that happened decades ago.

The film let us in to the colorful universe of Panem and its poor twelve districts. It features the central female protagonist Katniss Everdeen, played by Oscar-nominated actress Jennifer Lawrence who yet again delivered another beautiful performance similar to her lead stint in Winter’s Bone. Katniss is the caretaker of her sister Primrose whom she promised to protect no matter what and her widowed mother who is too depressed to do anything. She is a skilled hunter who uses her skills to feed her starving family.

When Primrose name was selected in her first year of eligibility to the game, Katniss stepped up for her sister and volunteered as a tribute. The baker Peeta Mellark was the boy chosen for their district. Both were brought to the Capitol, went through make-overs and a bit of training and eventually were brought to the battleground where violence soon claimed the lives of those who are participating in the game.

The film is almost three hours and you won’t even feel that it was that long because there’ just so much in it. It was never boring and the story itself is way engaging that you’d really feel the characters, like she / he are representing your district. The cast ensemble is impeccable. Everyone seemed to really play his or her part really well. My favorite characters in this film would have to be Effie Trinket (Elizabeth Banks), the mistress of ceremonies during the reaping for District 12 and Rue (Amandla Stenberg) from District 11. Her death was very heartbreaking that I can’t help but tear up a little. Jennifer Lawrence whose vulnerability and pain as she portrayed Katniss was the ultimate torch that carry the film altogether.

Gary Ross made some very interesting visuals in the film that contradicts the darkness of its main theme’s premise. There is no hesitation nor inhibition about the brutality of the game and the screenplay is just in its perfect state. The only criticism I may have about this film would have to be development of Katniss and Peeta’s love story. Overall, the film is as beautiful as its book but what the movie delivered is a world that captured the essence of its source into an effortless and magnificent cinematic experience.

Based on the book of Suzanne Collins