Set in the 60’s, the film takes us to the journey of Jack Twist (Jake Gyllenhaal) and Ennis Del Mar (Heath Ledger), two country boys hired to herd sheep through the summer at the Brokeback Mountain. There, they discovered some kind of connection that ultimately awaken something about themselves. As their lives goes on after their Brokeback Mountain stint, the two men realized that truly, absence makes the heart grow fonder. Over time, despite having individual families – they still see each other knowing that what they had is something that is far more important than any forces in their lives.

With the screenplay written by one of my favorite authors, (Larry McMurtry who wrote it along with Diana Ossana) my attachment with this film goes beyond being a fan of the story. The mood of the movie was as melancholic as its characters accompanied by its absolutely haunting musical score. The subtle approach of Ang Lee in delivering a controversial yet heavy emotional narrative allows its audience to weep with the character – such instance happen when the distraught Ennis Del Mar broke down while hugging Jack’s bloodied clothing. That for me was the highlight of the film. This film was short of a stunning portrayal of love loss and eternal questions of what-if. Ang Lee truly is a master of his craft.

Tonight is the biggest night in Hollywood as stars converge in Dolby Theater for the 85th Academy Awards. Last year was a very good year in films and the battle for tonight would validate the selected few who will get to win the Oscars and have their name written in the Oscar history book. With that being said, the competition is as stiff as last year when Meryl Streep and Viola Davis battled it out for the Best Actress category with the former winning her third statuette.

As for this year, like what I’ve been doing for the last couple of years – I’d be presenting my predictions / thoughts in certain categories with the THINK  and WANT format or Think / Want / Should Win format or Winner / Spoiler blah blah.

THINK / WANT / SHOULD – Argo is arguably the one to beat tonight with its unprecedented accolades left and right. The Golden Globes, Screen Actors Guild and the BAFTA hailed it as their Best Picture and I cannot imagine the Academy not following through and not recognizing the film despite the controversial snub of its director Ben Affleck.

SPOILER: If the Academy will snub this film just to be different, the award may go to Lincoln or Life Of Pi.

It should only be between Steven Spielberg and Ang Lee

With Ben Affleck getting no love from the Academy, I’ve this feeling that the Oscar will go to either Steven Spielberg or Ang Lee – both are previous winners. With this, I think it’ll be Steven Spielberg simply because I kinda think that (on a personal level) Spielberg’s direction was much better than the Life Of Pi of Ang Lee.

Think / Want / Should / No Spoiler: British actor Daniel Day Lewis is one of the favorites of the Academy having won two Oscars already. With his beyond impressive portrayal of Abe Lincoln, DDL could easily walk away with his third win – a well deserved win at that.

A Scene from Silver Linings Playbook

Now this is one of the most awaited categories of the night. Everybody thought Jennifer Lawrence had this already in the bag until Emmanuelle Riva’s name pops in and even snatching the BAFTA from JLaw. This could be a very interesting upset if the Silver Linings Playbook actress will go home empty handed after tonight.

THINK: Jennifer Lawrence – given the that American voters dominates the Academy, I should think that JLaw will get this. 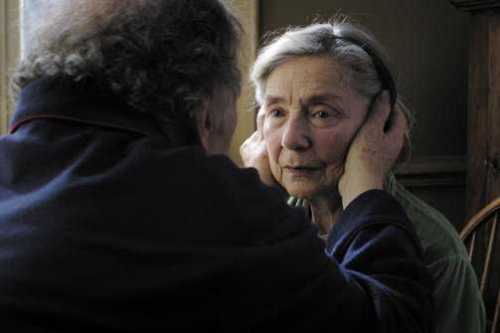 WANT and SHOULD  /SPOILER: Emmanuelle Riva – her moving portrayal in Amour is beyond. This is her first nomination and was touted to be the oldest to get the nod for this category. Not for sentimental reason because Miss Riva’s 86 but because I believe that she actually deserved it more than Jennifer.

No one – as in no one can beat Anne Hathaway tonight. Her portrayal of the ever so distraught Fantine in Les Misérables is perfection. The dynamic of her emotions as she sings the theme of the song has sealed her Oscar destiny. It’ll be such a shocker if Sally Field would snatch this one from her.

You cannot go wrong with Christoph Waltz when it comes to being cynical and all and Tommy Lee Jones have proven her worth a long time ago. I should think that it’s only between them and I’m betting towards Waltz winning this. Atleast I think the Academy have voted for him.

Think/ Should / Want  – Adele for Skyfall

Best Make Up And Hair

‘have not seen any of the short film / documentary categories so I opted to leave them alone instead of merely guessing! I hope the deserving winners would win tonight! ‘till next year!