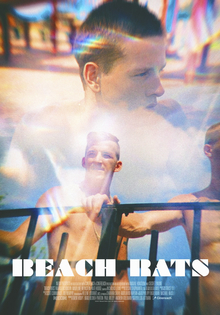 This film is like a Coldplay music video for me. It’s affecting and it’s melodious and by the end of it, it felt like you’re grasping for something. Beach Rats is so much like that. Its enigmatic lead Harris Dickinson is nothing short of spectacular playing a repressed youth from Brooklyn finding his sexuality and his place in the sun. It’s a rough environment for him and he’s got to fit the mold to survive.

The film was is so different from the young-adult LGBTQ+ stories with the usual arc of realizing their sexuality and coming out of the closet. In context it is almost the same but also different in the way Director Eliza Hittman explored the depth of a teenage longing for freedom, longing for identity and longing for self-expression.

The whole thing was like a loop with beautiful shots and grainy atmosphere. I enjoyed it immensely because I find it so realistic and Dickinson so effective. You can really see everything in his eyes – the fear, the excitement, his vulnerability. He’s someone to watch out for that’s for sure. I’m not sure if this would be most people’s cup of tea but it’s a good kind of film that doesn’t come very often in the genre.