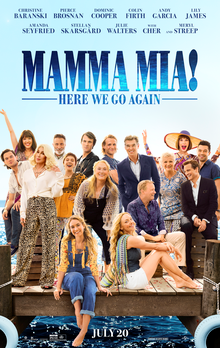 The first film, Mamma Mia was an absolute delight! I’m a big Meryl Streep fan and I absolutely adore the storyline of the first installment which was released a decade ago. Can you believe that it has been 10 years? Doesn’t feel like it at all!

I was able to catch Mamma Mia 2! Here We Go Again during its first week of showing in Manila and I’m pretty surprised that aside from its expected demographics lining up for it, a lot of younger viewers were actually there to watch it. Imagine that!

This film would disappoint some, if not all of Meryl Streep fans because this is a Meryl-less Mamma Mia! Ugh. It was rather head scratching at first when it was revealed at the start of the film that her character, Donna died a year before. The heart of the first film just had a little scene (but definitely the highlight) at the end and that’s it. I’ll be glad to tell you though that it wasn’t so bad that they killed Meryl’s character – I mean, they need something to work on. Although, personally I wasn’t convinced that it was the best route.

The first good thing about this installment is the inclusion of more music from ABBA (obviously) that I’ve never heard before aside from the more popular ones like Fernando, I Have A Dream and Waterloo that were not part of the first film. I have to be honest though, ABBA was not my generation, hence, my lack of knowledge about their catalogue. Secondly is the casting of Lily James (Cinderella, 2015) as the young Donna. She’s an absolute delight on screen and I couldn’t think of any other actresses that could do the role justice. And then there’s Cher. I was giggling throughout her scenes because she’s such a fucking queen especially when she sang the iconic Fernando. That was one of the highlights for me.

There’s also a bunch of eye candies here! The young fathers of Sophie are just all so dreamy! I particularly liked the very charming Josh Dylan as the young Bill! But really, the casting was fantastic!

Overall, it wasn’t as enjoyable as the first film because I wanted more Meryl in it but you cannot fault the treatment of the film paying homage to ABBA and Meryl Streep’s character – a film filled with beautiful people and jaw-dropping musical productions!

Music: When I Kissed The Teacher, I Wonder (Departure), One of Us, Waterloo, Why Did It Have to Be Me?, I Have a Dream, Kisses of Fire, Andante, Andante, The Name of the Game, Knowing Me, Knowing You, Mamma Mia, Angel Eyes, Dancing Queen, I’ve Been Waiting For You, Fernando, My Love, My Life, Super Trouper, The Day Before You Came