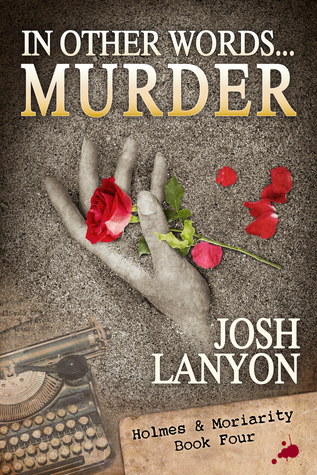 Even worse, Christopher’s ex also arrives–asking for help locating the man he left Christopher for!

It’s been ages since I’ve read something from Josh Lanyon and reading the fourth book off her Holmes and Moriarity series made me realized how much I missed her storytelling and it reminded me how much I absolutely loved almost all of her catalogue!

In Other Words…Murder is no exception. I absolutely adore this installment of the series where we see J.X. and Kit being all so domestic with each other, much more the inscrutable and super adorably funny Kit! I could totally picture him being all so awkward, snooty and of all things – romantic!

I totally enjoyed the mystery here. There are three things that are happening at the same time so I was a bit puzzled at first on how the author would tie up all the loose ends and being the awesome Josh Lanyon, ofcourse she’d find a way to do it neatly and I’ve to say that I’m more than satisfied with it.

This is highly recommended for the fans of the series and for those who have not had the chance to read anything from Ms. Lanyon, I suggest you start with this series and you’d definitely won’t regret it!

My only problem about the whole thing is the last page where she said that the next Holmes and Moriarity installment is still in 2020!!! Ugh. That’s like forever!!!!

This entry was posted in Books and tagged Book Review, Holmes & Moriarity Series, In Other Words...Murder, Josh Lanyon, LGBT Books. Bookmark the permalink.