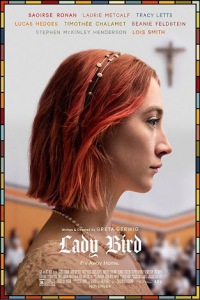 The Dixie Chicks once asked the questions – who’s never left home? Who’s never struck out? I think that most of the time, it’ll come to a point in our lives that we are ‘Lady Bird.’ I said that because when we’re young, there’s always this feeling that our world is too small for us, that we wanted to explore what life has to offer, what this world is waiting to show us. We want something so much that we persevere to get them. Sometimes doing things that we didn’t think was wrong when we did it and ended up regretting but at the end of the day, we have this sense of fulfilment.

Lady Bird are those feelings so cleverly translated by Greta Gerwig into a film. This coming of age film so brilliantly led by Saoirse Ronan is a tale as old as time that just works in so many ways because that is basically everyone of us when we’re at the cusps of adulthood.

Ronan playing the eponymous role was as usual terrifically sublime as the rebellious daughter who won’t let anyone hinder her aspirations – not by her friends, her school advisors and definitely not by her mother played by the equally wonderful Laurie Metcalf. Sometimes, it’s almost painful to watch their interactions or more of altercations because there’s vulnerability in both of their characters that everyone would relate to. You’d probably point out, hey! That’s me with my daughter – ouch! or that is me and my mom/dad sometimes!  Ronan and Metcalf made their chemistry as mother and daughter so palpable that it resonated so much with so many people.

Gerwig tried to snatch a lot of wigs for this film and she did so fabulously! Lady Bird is a cult classic waiting to happen. I wouldn’t even be mad for a sequel!