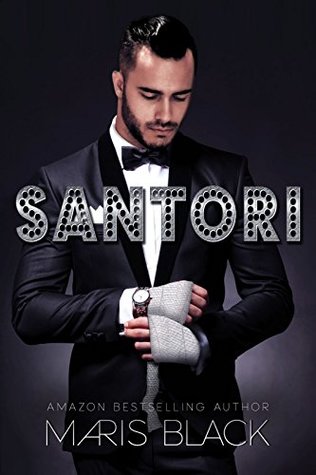 I’ve been so busy with a lot of stuff and I just found out recently that Maris Black just released the first book of another series which happened to be the continuation of Kage and Jamie’s story! Yay! You should know that I absolutely adore Kage and Jamie! The Kage Trilogy is one of my favorite series’ from this genre. I’d advise though, for those who have not read the Kage Trilogy to give it a go first before starting this one because this is obviously not a standalone novel.

The book is called Santori, the first of the The Santori Trilogy which mostly refers to Michael (Kage) and in a roundabout way to his vile uncle, Peter Santori. It picks up right after the event of Peter Santori’s death.

The story is told from the POV of both Kage and Jamie’s (and one quite an important character in the story). It’s very fast-paced mostly recapping what they’ve been up to through their temporary separation since Jamie still has to finish his degree in Atlanta before moving in permanently with Kage in Vegas.

The whole vibe of the story isn’t as dynamic as its predecessor so there’s a bit of a disconnect from Jamie and Kage for me. There’s more telling in it than actually showing if you know what I mean.

I still adore this two but I thought the narrative in general was a bit draggy. Kage keeps on reminding himself that one of the reasons they’ve had problems before was their lack of communication but he’s consciously NOT communicating with Jamie and vice versa. I mean, I get it. They wanted to protect each other and not be a nuisance but if you think about it, they just sound like two immature kids playing house.

The Peter Santori angle was the biggest reveal of this installment but while I find it fascinating, I find it a bit unnecessary to give that much of a space in telling his story. The last few chapters were almost drowned out by him and I got lost wondering about the implications of this reveal. I mean it is shocking but to what extent? The guy is dead, after all.

I don’t want to sound like I hated this book because I honestly don’t. There are fun parts in it especially the Paul-debacle. Gosh, that was over the top hilarious and I’m fucking living for it. I think I’ve to pause reading for a good ten minutes just to laugh! That was really funny and cute!

Now, I am anxious to get hold of the second book because I wanted to know where the author will take this story and up to what extent. It has a lot of exciting possibilities and the very thought that it’s going on the dark side is very much thrilling!

About The Author
Maris Black lives in the Southern United States. In college, she majored in English and discovered the joys of creative writing and literary interpretation. After honing her skills discovering hidden meanings authors probably never intended, she collected her English degree and got a job at a newspaper. But she soon figured out that small town reporting wasn’t going to pay the bills, so she went to work in the medical field. Logical progression, right? But no matter what she did, the self-proclaimed compulsive plotter couldn’t stop writing fiction.

“The M/M genre feels sort of like coming home,” she says. “I can’t quite explain it. I’ve always had openly gay and bisexual friends and relatives, the rights and acceptance of whom are very important to me, so it feels great to celebrate that. But there’s also something so pure and honest about the love between two men that appeals to me and inspires me to write.”