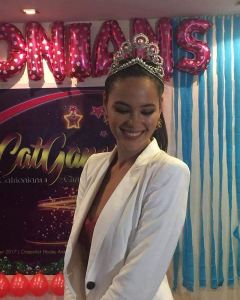 The 2017 pageant season isn’t quite over yet since Katarina Rodriguez has yet to compete in her respective pageant assignment but since Miss Intercontinental 2017 edition is still slated for a January 2018 staging in Egypt, the buzz about the prospective queens next year is getting louder and louder especially after the lackluster results we’ve got from Miss World, Miss International and the Miss Universe pageant.

This early, we’ve been hearing one particular name that pageant fans and pundits are dying to see make a “comeback” and strut at the Binibining Pilipinas stage. It is none other than the top five finisher of the Miss World 2016 – Catriona Gray.

I for one is a big fan and couldn’t wait to see her win the most coveted title in the Binibining Pilipinas – the Miss Universe Philippines. She’s just so beautiful and smart that if we end up hosting the pageant next year – I’ve no doubt that she may end up winning the fourth Miss Universe crown for the country if she would decide, of course to truly participate in the nationals and (hopefully) bag the top plum.

Back in 2013, I’ve written a similar piece about Megan Young’s “supposed” intent to participate in the Golden edition of the Binibining Pilipinas. Her (again) “supposed” disqualification in joining the national pageant turns out to be a blessing in disguised as she went on to win the Miss World Philippines giving her a chance to represent the Philippines in Miss World 2013 where she end up winning the title, thus becoming the first winner of the blue crown in the country.

I STAND FOR LOVE. ❤️💜💛💚💙♥️ So inspired by last night's #Love Gala! Here's a small message to create a ripple of awareness in my community of friends and followers about HIV/AIDS here in the Philippines. 🎗️🇵🇭 There a three ways you can give your love to this cause: Support, Volunteer & Donate. Visit www.lovegala.com for more information ♥️ Thanks for reading beautiful people! 😘

As of the moment, Catriona and her camp (the Aces & Queens – the same beauty camp of Miss Universe 2015 Pia Wurtzbach, 2013 Miss World Megan Young and 2016 Miss International Kylie Verzosa) are keeping mum about her plans but it’s still very early to release a statement ofcourse since the Miss Universe was just held a week ago in Vegas! For now, let’s just keep our fingers crossed!