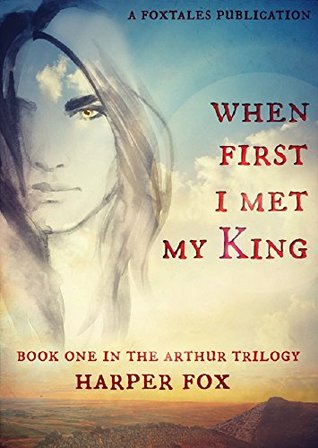 Blurb: Once upon a time, there was a winter that wouldn’t end. And all that’s standing between the people of White Meadows and starvation is a young man called Lance.

He’s sixteen years old, and for all his courage and hunting skills, he’s running out of fight. His family has been wiped out in a border raid, and he’s drowning in loneliness. When strangers arrive at White Meadows, all Lance can think of is using his last strength to drive them away.

But these men have come in peace, not to burn and destroy. Among them is a hot-headed, utterly charming prince-in-training named Arthur.

For Lance, Arthur’s arrival is like the return of the sun. The prince has everything – learning, battle skills, a splendid destiny. But as the days unfold in the remote northern settlement in the shadow of Hadrian’s Wall, it soon becomes clear that Arthur needs Lance, too.

I’ve to tell you though that prior to reading this, I’ve no clear background on the legends of Arthur, Lancelot all and I’ve only watched a couple of films, seen a bit of Merlin and read a few fan fiction which are all salacious in nature. Hah!

But hey, I am a huge, huge fan of Harper Fox so I’d eat up anything she offers. This story is actually kind of cute. I immediately fell for our two young adult protagonists. Lance is adorable with all his naivety and Arthur is plain riot! I loved that they have different voices! As per usual, the author’s lyrical writing is her absolute asset so you’d really get the feel of the era! I want more from these two! I’m so happy it’s a trilogy!!!

Highly recommended and this is from someone who doesn’t know shit about any Arthurian tales.

About The Author
Harper Fox is an M/M author with a mission. She’s produced six critically acclaimed novels in a year and is trying to dispel rumours that she has a clone/twin sister locked away in a study in her basement. In fact she simply continues working on what she loves best– creating worlds and stories for the huge cast of lovely gay men queuing up inside her head. She lives in rural Northumberland in northern England and does most of her writing at a pensioned-off kitchen table in her back garden, often with blanket and hot water bottle.

She lives with her SO Jane, who has somehow put up with her for a quarter of a century now, and three enigmatic cats, chief among whom is Lucy, who knows the secret of the universe but isn’t letting on. When not writing, she either despairs or makes bread, specialities foccacia and her amazing seven-strand challah. If she has any other skills, she’s yet to discover them.

This entry was posted in Books and tagged Arthur Trilogy Series, Book Review, Harper Fox, When First I Met My King. Bookmark the permalink.