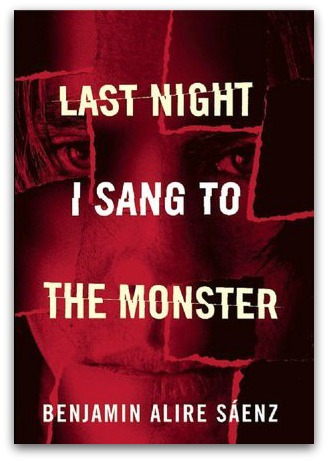 Eighteen-year-old Zach does not remember why he’s in a rehabilitation center for alcoholics, but with therapy and group sessions, he soon finds out that he’s capable of dealing with his past and be able to work on his recovery.

I decided to pick this up when I found out that the author was working on the sequel of his multi-awarded novel Aristotle and Dante Discover the Secrets of the Universe. I just wanted to get a feel again, of how this author lured me the way he did with Ari and Dante’s story and this one totally gave me those feelings again! [and this came out three years before Ari and Dante] What an incredible novel! The quality of his writing is impeccable. His characterization rich and the realism behind each character masked through his beautiful prose is fucking genius! Seriously, I cannot even begin to tell you how much I laughed with Zach, cried with him and all those crazy mixed-up emotions that it felt like I was living his life.

I believe this story. I devoured everything in it although Zach may have used a few expressions excessively – I believed that these were actually part of his personality where he could not fully articulate himself, depending mostly on his ‘private conversations’ with people.

While reading it, I was Zach in the story – not that I’m an alcoholic, an addict or something but there’s something about his character that totally resonates with me. The ‘lost me,’ the ‘little boy’ me that may have been looking for some happiness. I dunno, it’s almost depressing to think about those times while I’m writing this review but yeah, I guess the book is kind of depressing but not in a “I will wallow in this shit and will cry myself to sleep” kind of way. I guess, what I’m trying to say is that you have a choice to read this book and get all weepy about it or read this, wallow in it but expect that at the end of it – there’s some sort of happy ending waiting for you. I liked that in this book. It’s dark in a way that it showed the reality of people suffering from addiction. There was no sugarcoating the fact that it’s not just about destroying themselves but it’s also about destroying everything around them, but most importantly – something I’ve gathered from experience that it’s actually a cry for help.

Last Night I Sang to the Monster is an evocative prose of a novel that will leave you enthralled with Benjamin Alire Sáenz artistry! What a truly delightful masterpiece!

About The Author
Benjamin Alire Sáenz (born 16 August 1954) is an award-winning American poet, novelist and writer of children’s books.

He was born at Old Picacho, New Mexico, the fourth of seven children, and was raised on a small farm near Mesilla, New Mexico. He graduated from Las Cruces High School in 1972. That fall, he entered St. Thomas Seminary in Denver, Colorado where he received a B.A. degree in Humanities and Philosophy in 1977. He studied Theology at the University of Louvain in Leuven, Belgium from 1977 to 1981. He was a priest for a few years in El Paso, Texas before leaving the order.

In 1985, he returned to school, and studied English and Creative Writing at the University of Texas at El Paso where he earned an M.A. degree in Creative Writing. He then spent a year at the University of Iowa as a PhD student in American Literature. A year later, he was awarded a Wallace E. Stegner fellowship. While at Stanford University under the guidance of Denise Levertov, he completed his first book of poems, Calendar of Dust, which won an American Book Award in 1992. He entered the Ph.D. program at Stanford and continued his studies for two more years. Before completing his Ph.D., he moved back to the border and began teaching at the University of Texas at El Paso in the bilingual MFA program.

His first novel, Carry Me Like Water was a saga that brought together the Victorian novel and the Latin American tradition of magic realism and received much critical attention.

In The Book of What Remains (Copper Canyon Press, 2010), his fifth book of poems, he writes to the core truth of life’s ever-shifting memories. Set along the Mexican border, the contrast between the desert’s austere beauty and the brutality of border politics mirrors humanity’s capacity for both generosity and cruelty.

In 2005, he curated a show of photographs by Julian Cardona.

He continues to teach in the Creative Writing Department at the University of Texas at El Paso.

This entry was posted in Books and tagged Aristotle and Dante Discover the Secrets of the Universe, Benjamin Alire Sáenz, Book Review, Last Night I Sang to the Monster. Bookmark the permalink.