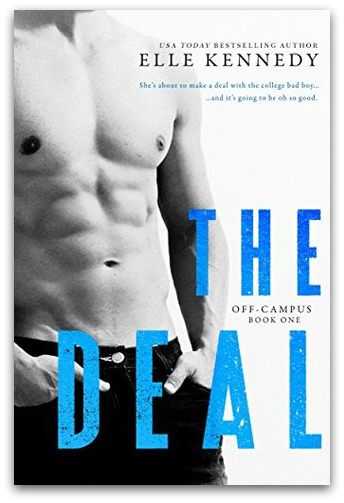 I’ll say right off the bat that this is the best college romance I’ve read in ages! The story, the characters, dialogues…ooh, I’m sure glad I took a chance with this one and it totally paid off!

Elle Kennedy wrote one of my top reads from last year (Him with Sarina Bowen) so I am pretty excited to see how she fared writing solo and man’ she writes exceptionally well! The Deal is the kind of book that you’d want to reread over and over again because it’s just easy, steamy, has enough angst and just really oh-so-wonderful to read! I’m still grinning like an idiot remembering the two MCs from the book.

Hannah Wells aka Wellsy had this huge crush on football jock Justin Kohl but the latter doesn’t even know she’s alive. What in a world a girl can do?

Garrett – captain of the hockey team, in order to continue playing hockey needs to pass a make-up exam and he just found the solution to his problem.

He convinced Wellsy to tutor him in exchange of making Justin notice her. Easy enough yeah? Only what they didn’t expect from this deal is a plethora of things that may lead to something more – something sexy and something that involves the heart.

These two are just freaking adorable! I cannot at their chemistry. It’s just so good! I loved that they both have something from their pasts that may have bonded them even more and both background are very much realistic. Although in a perfect setting, I would have liked for Garrett to pummel Aaron (won’t tell you who this one is but it’s the douche from Wellsy’s past) into oblivion! If this weren’t a series, I would’ve wished for an epilogue a few years after college and I’d be in my own fairy tale haven then! But yeah – it’d be fun to see them again in the upcoming books.

I also loved the side characters here. Hannah’s and Garrett’s friends are just awesome people! [I just have to insert Logan – Garrett’s BFF – because I was reminded of Logan from More Than Her by Jay McLean and he also had a thing with his bff’s girl – just saying] It’s interesting to see where this series will go next but I am sure glad that I picked this one up because it just totally made my day! I will definitely be checking out the rest of the series! Bravo Elle Kennedy!

About The Author
A New York Times, USA Today and Wall Street Journal bestselling author, Elle Kennedy grew up in the suburbs of Toronto, Ontario, and holds a B.A. in English from York University. From an early age, she knew she wanted to be a writer, and actively began pursuing that dream when she was a teenager.

This entry was posted in Books and tagged Book Review, Elle Kennedy, Off-Campus Series, The Deal. Bookmark the permalink.