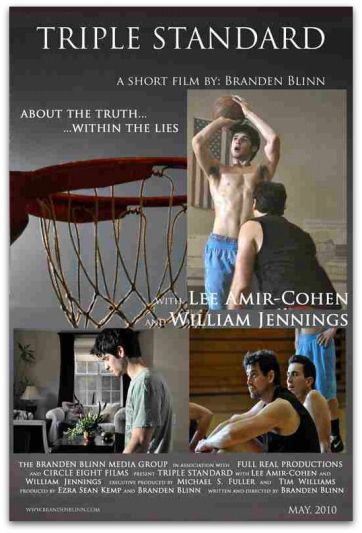 Triple Standard is a short film about Crim, a homophobic ex-professional athlete who’s in denial of the reality of his situation as a gay man which he refuses to acknowlegde telling his partner of three years, D that he is in fact bisexual – even insisting that they are both bisexuals. (I mean, in the scope of things…)

The movie started with Crim, D, Stanley and their friends in the locker room after a friendly game of basketball. When Stanley messes with Crim (William Jennings) licking his armpit, Crim went berserk spewing a litany of homophobic remarks. At the shower room, Crim was still seething with some of their friends noticing D (Lee Amir-Cohen) being quiet through it all. When D went home after the incident, Crim was anxiously waiting in the living room. It turns out that they have actually been living together for years now. Crim’s denial towards his sexuality, even acknowledging his “standards” that they have talked about before left D hurting thus issuing an ultimatum to end their relationship if Crim will not stop and face reality.

I very much enjoyed watching this short film because it totally depicts the reality of most closeted men (most especially the ones in the spotlight) where they would rather deny themselves the freedom to acknowledge what they are than be condemned by the cruel and unforgiving society.

Coming from D’s point of view, it’s really hard to be with someone that basically denies what you have. It gets to a point where enough is enough. And from Crim – well, reality sucks big time. At the end of the day though, why should they let others run their lives? I guess that’s too easy to say from someone who isn’t not in their shoes.

The actors who played Crim and D are both likable. I can just feel the hurt pouring out of Amir-Cohen throughout those latter scenes. Jennings was equally impressive! They really do have great chemistry and I won’t mind seeing them together on screen again.

Do spare 20 minutes of your time to watch this short film for free, I promised that it won’t go to waste.