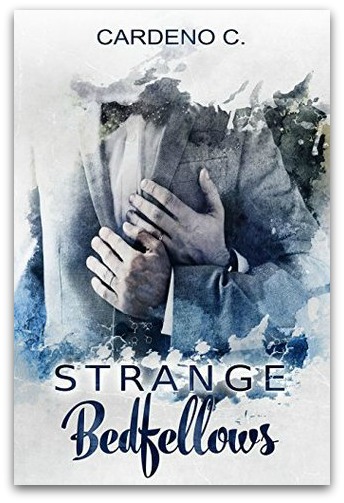 Strange Bedfellows is a story of a billionaire Democrat son who falls for a very closeted and religious Republican congressman. So from this premise alone, you’d know that there’ll complications bound to happen. (Errr…)

Trevor Moga is the billionaire son of the US President and doesn’t give a hoot about politics, not big on religion and doesn’t have a tight knit family in normal ways. Bradford Hollingsworth Jr. however is the opposite aside from his party affiliation – the guy’s focused on his political career, was raised to follow his religion and is a family guy in every sense of the word.

I loved the initial approach of the author with Trevor and Ford. It was sexy and fast-paced as we get a feel right away about their characters. It’s easy to like them from the get go and their scenes together (which is 90% involving sex) are always hot.

The story goes the usual route. Trevor is openly gay, rich and does whatever it is that makes Ford happy. Then there’s Ford who’s been trying to figure out a way to come out since meeting Trevor. Then there’s the little fight about their relationship being a secret, the meeting the parents and the happy ever after.

Everything seems to fall into their rightful places. It’s a feel good story masked into a rather angsty premise but was actually non-existent all throughout the story. I’m not saying it’s a bad thing though. It was in fact enjoyable reading it the way you read the usual kid’s fairy tale where the prince arrived in a white horse to save the princess from the evil witch. It’s not even that predictable. It’s just too unrealistic and a bit anti-climactic because it totally lacks conflict so the whole dealio about coming out and being a Republican no less was like – okay, just another day in the office…

I swear, I enjoyed reading it though. Halfway through – I’ve gotten bored with Ford’s character because I was thinking that the story would go the usual route about him being in the closet but when it didn’t because the author decided to cut every angsty shit off – I thought, it was rather a wise decision since I didn’t see that coming at all. Not very clever but very convenient to say the least. I’d recommend this book for peeps that are looking for some sexy and sweet happy ending fairy-tale like romance in a pseudo-political setting.

About The Author
Cardeno C. – CC to friends – is a hopeless romantic who wants to add a lot of happiness and a few “awwws” into a reader’s day. Writing is a nice break from real life as a corporate type and volunteer work with gay rights organizations. Cardeno’s stories range from sweet to intense, contemporary to paranormal, long to short, but they always include strong relationships and walks into the happily-ever-after sunset.