Book Review: How To Howl At The Moon – Eli Easton 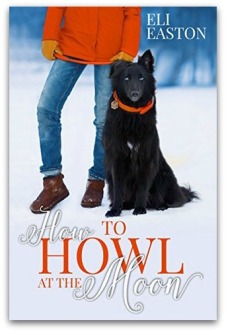 Have you ever felt so much giddiness after reading a book? I know I did and that is because of this “bursting-with-cuteness” book! I simply adore Eli Easton and have not read a book from her which I did not like. How to Howl at the Moon just totally got it from the get go.

Mad Creek is a little town where the population mostly consists of ‘quickened’— they are dogs who have gained the ability to become human. (I know right? Totally odd but totally fresh – ooh and totally wicked as well!). Lance Beaufort is the town sheriff and also a quickened descended from Border Collies. So when he came across the lanky and fumbling newcomer Tim Weston, he started to doubt him since he’s concern about marijuana growers infiltrating their own little world.  To satisfy his curiosity, he pretended to get hit by Tim’s car and was adopted in the process. Only things didn’t go well as he’d planned when he finds himself getting attached and falling for Tim. But how can he explain the deception to Tim?

How to Howl at the Moon takes on this new twist about “shifters” which I find odd at first but once the story started rolling – everything went perfectly! I just totally loved – as in LOVED it. I loved that the series actually started with the person / quickened whose main job is to protect the town! I love Lance! He’s such a goofball for even plotting that plan to check out on Tim! I also love Chance! I don’t know which I loved more – the human or the quickened Lance! Okay, so I’d go with both of them then.

Tim was just a sweet little thing. I loved his sensitivity and I just adore his awkwardness towards people. He’s such a darling!

The story development was fast-paced which I loved and the whole quickened thing was explain reasonably by Lance but I want more explanation in the second book. I want to know if there’re more places where quickened actually resides. My only tiny-itty-bitty concern about the story was the hybrid roses Tim was supposed to grow for the lady who let him rent her place in Mad Creek. It’s not a very big deal really but I was just a bit curious.

Anyhow, this was definitely a very good start of the series and I’m certain that the next one would be even better but right at this moment – Lance and Tim just totally stole my heart!

Again, what mad writing skills you have Miss Easton. Bravo!

About The Author
Having been, at various times and under different names, a minister’s daughter, a computer programmer, a game designer, the author of paranormal mysteries, a fan fiction writer, an organic farmer and a profound sleeper, Eli is happily embarking on yet another incarnation as a m/m romance author.

As an avid reader of such, she is tickled pink when an author manages to combine literary merit, vast stores of humor, melting hotness and eye-dabbing sweetness into one story. She promises to strive to achieve most of that most of the time. She currently lives on a farm in Pennsylvania with her husband, three bulldogs, three cows and six chickens. All of them (except for the husband) are female, hence explaining the naked men that have taken up residence in her latest fiction writing.