Book Review: Of Being Yours (Another Way, #2) – Anna Martin 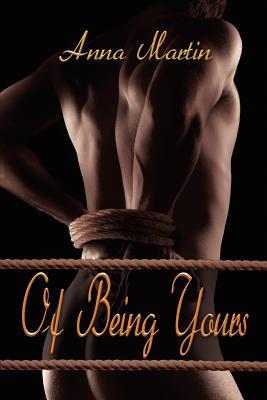 [Book 2 of Another Way series]

Blurb: It’s been three years since Jesse Ross had to choose between his Master and his girlfriend-three years he’s spent living in a loving relationship with Will, his Dom, and finally being open about his sexuality. To the outside eye, Jesse and Will’s relationship is settled, solid, and romantic: people expect them to settle down, get married, have a family. It takes a car crash to expose the papered-over cracks in their life together. Traumatized by the crash, Will finds his confidence shattered. After unintentionally causing Jesse pain during the accident, Will finds it impossible to hurt him in the bedroom, and suddenly he has to reassess his ability to be Jesse’s Dom. The emotional and physical deadlock leaves Jesse struggling to hold the pieces of their tattered relationship together. The physical scars may heal with time, but the emotional trauma has left more damage than either man could have anticipated….

I really loved the progress of Will and Jesse’s relationship. I loved the sweetness of it all and how the author showed their vulnerability especially with Will. I also loved the timeline of the story – pacing wise. I loved that we get to see them as they navigate deeper into their relationship. Although the “accident” was somehow an important plot point, I find it a wee bit stretched out which apparently became the game changer in their relationship. I also almost wished that they accepted Maddie’s offer but in hindsight – it’s very transparent that they are not yet ready for it. I really loved that the focus of this second installment was still inside Will and Jesse’s little bubble. There are some characters that I thought will stir shit up but I guess that would happen in the third book. Again, this is an exceptional read. Rarely I enjoyed reading  a BDSM themed  story and this one’s definitely up there!

About The Author
Anna Martin is from a picturesque seaside village in the south west of England. After spending most of her childhood making up stories, she studied English Literature at university before attempting to turn her hand as a professional writer.

Apart from being physically dependent on her laptop, she is enthusiastic about writing and producing local grassroots theatre (especially at the Edinburgh Fringe Festival, where she can be found every summer), travelling, learning to play the ukulele, and Ben & Jerry’s New York Super Fudge Chunk.

Anna claims her entire career is due to the love, support, pre-reading and creative ass-kicking provided by her closest friend Jennifer. Jennifer refuses to accept any responsibility for anything Anna has written.

This entry was posted in Books and tagged Anna Martin, Another Way Series, Book Review, Of Being Yours. Bookmark the permalink.