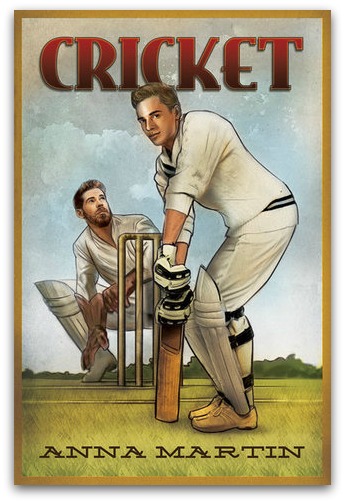 BLURB: New York native Henry Richardson needs a change. His boyfriend just dumped him, and his business has fallen victim to the economy. But is jumping on a plane after a surprise phone call taking things too far?

The promise of a new opportunity drags Henry away from the city to a tiny village in the English countryside and an enormous manor house his great-grandmother wants to bequeath him. As an experienced wedding planner, he sees the potential in renovating the dilapidated building and using it for events. All he needs is to find some local businesses to provide the essentials.

That’s how Henry meets Ryan Burgess, the shy but hardworking owner of an organic farm. The spark between them sizzles slowly while work on the house continues, but Ryan is deeply in the closet and unwilling to take the last step. They finally find something that clicks in cricket, something that Henry, a former amateur baseball player, is surprisingly good at. For him, cricket helps bridge the gap between England and New York—but unless Ryan can find something to span the divide between his sexuality and his fear, their relationship doesn’t stand a chance

This book is one of my favorite reads from last year along with her novel Tattoos & Teacups. There’s just something about her writing style that lured you further with her story and her characters. Cricket is one story that I’ve always reread since my first time getting ahold of it. The sceneries, Henry and Ryan’s character, the dialogues! It’s just perfection! Much as the same way Tattoos & Teacups was written – the author employed both realism and metaphorical description to develop the story. I loved the frankness of Henry’s character here. There was no pretention in it – just one solid characterization. There was also an overflowing charm from Ryan’s character. His hidden desires, the underlying sexual tension between him and Henry and just the way his personality resonates with the things he’s experienced was just amazing! The story was vivid, charismatic and all too British that it feels like you need to experience it yourself.

About The Author
Anna Martin is from a picturesque seaside village in the south west of England. After spending most of her childhood making up stories, she studied English Literature at university before attempting to turn her hand as a professional writer.
Apart from being physically dependent on her laptop, she is enthusiastic about writing and producing local grassroots theatre (especially at the Edinburgh Fringe Festival, where she can be found every summer), travelling, learning to play the ukulele, and Ben & Jerry’s New York Super Fudge Chunk.
Anna claims her entire career is due to the love, support, pre-reading and creative ass-kicking provided by her closest friend Jennifer. Jennifer refuses to accept any responsibility for anything Anna has written.

This entry was posted in Books and tagged Anna Martin, Book Review, Cricket. Bookmark the permalink.