And so the story continues… 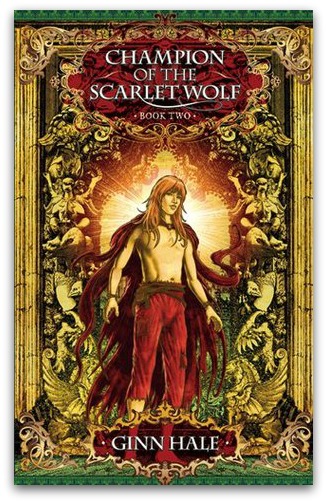 Skellan saved Milmuraille from the demon Lord and Oesir is now dead. He also found out that he’s actually the stolen son of count Radulf and one of the grimmas. Now, it’s time for him to step up as their leader and with Elezar Grunito in his side along with his “powerful” friends – are they equipped enough to beat the Old gods?

Now, this I enjoyed immensely because it’s so full of action I can’t even turn a page without any sort of chaos ensuing around Skellan and Elezar. It’s also fun to see Elezar finally loosening up and his acceptance towards his true nature. He’s obviously over with Javier but he’s still got a lot to learn about being comfortable with a man. I loved that he and Skellan are so in-synch and it may be because of Skellan’s spells but cmon’ it’s got to be true love right? After all, Elezar is Skellan’s man.

I also loved that in this second book of the Scarlet Wolf – we get to see more of Javier and Kiram affectations towards each other. It was so beautiful to read how they are so comfortable with each other and how through the years, they’ve grown not only as a couple but as individuals. It makes me feel a bit nostalgic thinking back when they were still students of the Sagrada Academy.

At the end of this story, I feel like there’s more to these characters. I may want to have Morisio and Altreau’s story although I’m not that certain about Altreau’s  true orientation – I may have to cross my fingers that this playboy nobleman will give Morision a chance after all. Oh and wouldn’t it be fun to have Kiram’s brother and Altreau fighting for Morisio’s affection? I don’t think it will happen but I want some resolution in this series – I mean, I want Cadeleon to change its law and I want Prince Sevanyo to have his own story. I feel like there’s more that Ginn Hale could explore in this story. In the meantime, go to Amazon and buy this epic series. It’s just so worth it!