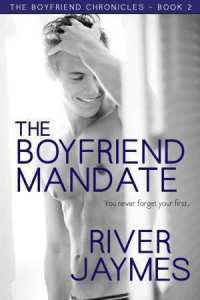 [Book 2 of The Boyfriend Chronicle Series]

After a number of failed relationships, Doctor Tyler Hall decided to stick to one simple mandate that is NEVER TO DATE ex-boyfriends. But when his world collides again with his first love and first boyfriend stuntman and cancer survivor Memphis Haines, the doctor’s resolve seems to falter.

Tyler was the douche ex-boyfriend back in the first book in the series, The Back-up Boyfriend which featured his then ex and fellow Doctor Alec Johnson and his now boyfriend Dylan Booth. I didn’t think that Tyler will be able to redeem himself in this book after what he did to Alec. I never liked his character in the first book given that he was portrayed as the villain in it. In this book though, we see the true side of Tyler and why he did what he did to Alec. Here, we get a glimpse of the young mathlete geek who fell in love with his jock roommate in college. It was a nice story but rather long and repetitive.

And can I just mention the excessive use of “Judas Priest”, “Christamighty” “Jesus Fucking Christ” – I feel like reading these expressions every couple of pages and they get annoying at times. I’m like really??? 0_o I ain’t religious or anything but man’ that’s a whole lot of usage which is not necessary at all in some parts.

This was a good book to say the least. I’m not particularly jumping up and down after reading it but it’s alright. Definitely not as good as the first book in the series but it’s good. I’d still read the upcoming books in the series if ever there is another in the future – which I’m guessing will be for their rich, flamboyant gay friend Noah. Yup, I’d definitely read it.