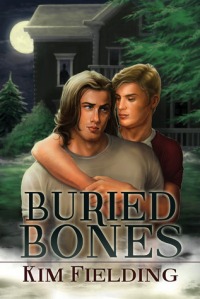 [Book 2 of the Bones Series]

After killing the guy who turned him into a werewolf and tried to kill his boyfriend, Architect Dylan Warner and handyman Chris Nock knows that they still have a lot to work on with in their relationship what with Dylan’s once-a-month transformation from man to beast and Chris’s difficult childhood. Working on their issues, a ghost haunting in Dylan’s home forced both men to deal with their pasts. Dylan is trying to deal with the aftermath of killing Andy by learning new things about the guy and Chris got face to face with someone from his childhood he’d almost long forgotten. These events led to new discoveries about both men’s pasts that neither of them ever expected.

I am in love with this series and I loved both MCs here. I thought Chris’s character was just way adorable and I love the easy chemistry between him and Dylan. It was instalove for me when I read the first installment of the series and for some reason, I’ve gotten pretty busy doing [or reading] other stuff that I didn’t get back to this until now. It’s wonderful to finally revisit the story of this wonderful couple. I loved how the author made this second installment seamlessly compatible with the first book without missing its charm. Dylan character is still someone you’d root for and his love and patient for Chris was just oh-swoon-worthy. Sometimes, with these sort of books involving supernatural being – there’s always a preconceived idea that there’s going to be a lot of exaggeration and almost ridiculous story-line because it’s fantasy after all but the author made sure that in this book, it feels like living an existing world where the characters just feels like your next door neighbor. Do you get my drift? If not, I rather have you grab a copy of this five-star [from me and from a ton of people] rated series and read it for yourself 🙂

About The Author
Kim Fielding lives in California and travels as often as she can manage. A professor by day, at night she rushes into a phonebooth to change into her author costume (which involves comfy clothes instead of Spandex and is, sadly, lacking a cape). Her superpowers include the ability to write nearly anywhere, often while simultaneously doling out homework assistance to her children. Her favorite word to describe herself is “eclectic” and she finally got that third tattoo.

All royalties from her novels Stasis, Flux and Equipoise are donated to Doctors Without Borders.