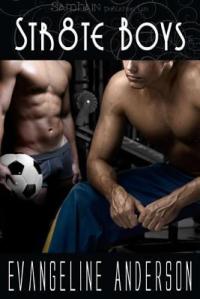 What I’ve read from this short story and even based on its title and the cover itself is exactly what I’ve expected. Two college jocks fooling around with each other and eventually they fell in love. It was pleasant enough story, shallow but nice. Although I’ve to wonder why such story took more than 20 page to write but hey, that’s just me

synopsis via Goodreads: How far would you dare to go…to win it all?

Maverick Holms and Duke Warren share almost everything–a college soccer team, an apartment and the same extremely competitive nature. Thanks to that never-back-down spirit, they’re about to share more than they bargained for.

The game is “gay chicken.” The rule: get as close as possible without kissing, and the one that pulls away first is the loser. The problem: neither of them likes to lose. It isn’t long before the game becomes an excuse to touch and kiss in every possible forbidden way. And after they pose for a gay website to earn extra money, things really heat up.

Suddenly Duke is talking lifetime commitment, and Mav is backpedaling as hard as he can, not sure if he’s ready to accept all his best friend is offering him. Or the truth about what he is.