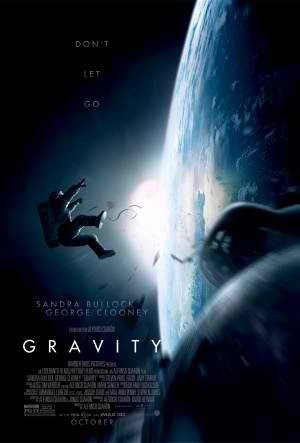 During the film’s theatrical showing here in Manila last year, the film initially garnered mixed reactions from the audience. Some people totally loved it and some peeps are just plain disappointed. Now, re-watching the film, I find myself still enamored with the whole idea of Afonso Cuaron’s baby.

Gravity is a space thriller that allows us to travel into space and be trapped in it. Yes, along with Dr. Ryan Stone (Sandra Bullock) and Matt Kowalsky (George Clooney,) we the audience went to our first shuttle mission with Kowalsky as our guide and advisor. But you see, Kowalsky couldn’t save us as we’re all running out of oxygen and we’ve little chances of survival to begin with. Much to our disappointment, we aren’t even trained to do this unlike the two! Great! Just fucking great!!

You see, Stone was a medical engineer who’s been training at NASA with Kowalsky supervising her. Now, the good thing is, like us – this was her first mission as well. But due to some stupid crew from some space station I wouldn’t even mention, we’re screwed! Their nasty debris went to our direction and we’re left floating around the space hanging rather floating for our dear life. Oh and thanks to you Ed Harris – thinking of Apollo 13 made me even squirmed! Let’s switch places here please! This is our doom!

Now, Stone’s just being overly dramatic. No don’t move Stone. You’re still good. Save the oxygen pretty please. I love it that I couldn’t exactly guess what you are thinking now since I can see everything in your face alone! That is what I call great skill! Keep that up Stoney!

I’m suffocating now, I mean’s where’s the sun and why is it all dark? Yes, Stone – I told you! You are not to say a single word! You’re only allowed one word per eight minutes! Yup, okay. You’re doing great  just now! Let’s keep this up. And Kowalsky, you’re the man. You know it.

And that my friend was the effect of watching the film,– Cuaron took us to a place where we are with the characters. It’s a spectacular creation from a genius imagination with the help of some technical whiz kids. Now, I can’t tell you enough how much I totally enjoyed watching this film. It’s literally mind boggling – in a sense that this couldn’t possibly be that good. I mean, how did Cuaron made this one??

*The film is nominated for 10 Academy Awards including  Best Actress, Best Director and Best Picture to name a few