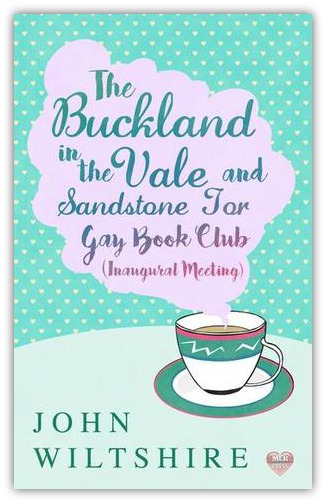 Blurb: Rory McGrath suffers from a debilitating condition—he caught it from reading too many books. Rory believes in true love. He’s saving himself until he finds it, preferably with Mr Darcy, but definitely not with the arrogant, unpleasant ape Adam Sandstone. Adam isn’t impressed with Rory either. Both Rory and Adam have yet to learn, however, that you cannot always judge a book by its cover. The nine other members of the new club could have told them this, had they been consulted. The founders of the Buckland-in-the-Vale and Sandstone Tor Gay Book Club know only too well that not all truths are written in books. Truth, like life, is what you make of it.

I’m not entirely sure yet on how to permanently place this book on my like-o-meter because there are parts of it that I really, really love whilst some scenes (mostly from the insufferable Adam Sandstone) makes me want to hurl my e-reader into someone or something. Preferably against my nosy neighbour’s flower garden. Or my neighbour himself. Truth.

I loved Rory because I can totally relate to him and geez, he’s basically me (minus the model-pretty look, lol!) He’s funny, incredibly charming and just about the most adorable ever! His perchant for apologizing is just too endearing…made me winced a couple of times but mostly, made me root for him and his quest for his one true love. A total darling indeed!

Adam on the other hand is the total opposite of Rory. He’s abrasive, insolent, self-absorbed and just about the biggest prick in their little home town. And he’s drop-dead gorg. Served the military. And again, a prick. I didn’t like him one bit if I’m being honest. And his douche move during the party made me a bit restless that I need to pause on my reading. It’s really minor so it’s a “me” issue. Ugh.

The old dears of course are just about the best book club members ever! They’re like the Desperate Housewives, only 20 years older, funnier and actually knows how to read. Hah! They’re just so cute!

John Wiltshire’s humor is always spot on. His writing style kind of reminds me of Josh Lanyon. The latter isn’t known for her humor but their style got the same intensity regardless of the genre and theme of the story.

Here, we’ve got a full-on John Wiltshire humor mixed with some of his characters’ usual angst (from Adam, ahem!). A tiny bit of angst, that is. It’s a HFN ending which I thought was kind of cruel because I just want lovely Rory to get his happy-ever-after-book-ending. I reckon that there would be a second book in store for us? I do hope that it’s for another couple altogether – say the vicar himself? Yay! Is that even possible? Not entirely sure about the mechanics but yeah…   I’m going to finish this asking you guys to pick this up because it’s an absolutely delightful read. For now, I think I’d categorize this one as “I kinda liked it.”

About The Author
John spent twenty-two years in the military, perfecting the art
of looking busy whilst secretly writing. He left as a senior officer
when his tunnel was ready for use. He is now living in New
Zealand until he can raise enough money to leave. Although he
has no plans to return to the army, he can occasionally be caught
polishing his medals.

This entry was posted in Books and tagged Book Review, John Wiltshire, The Buckland in the Vale and Sandstone Tor Gay Book Club (Inaugural Meeting). Bookmark the permalink.